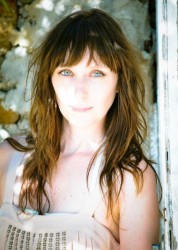 A Vanderbilt University writer-in-residence whose first poetry collection explored how her world changed through a violent personal loss has expanded her focus to the psychological effect of traumatic memories on soldiers and others affected by war.

Beth Bachmann is the author of Do Not Rise (Pitt Poetry Series, January 2015), which received the 2011 Alice Fay di Castagnola Award from the Poetry Society of America for a manuscript in progress.

Bachmann and Tony Earley, both of whom teach in Vanderbilt’s highly-ranked MFA Program in Creative Writing, will read from their latest work on Thursday, Jan. 29.

Earley’s newest publication, Mr. Tall (Little, Brown, August 2014) is his fifth book and second collection of stories. The dual reading, which is free and open to the public, will begin at 7 p.m. in Furman Hall, Room 114.

“Do Not Rise is a book about trauma, specifically post-traumatic stress,” Bachmann said. “Although PTSD might be the part of trauma we talk about least, it’s the longest part. Too many veterans return home to joblessness, homelessness, and commit acts of violence against self and others. I want to open and continue a conversation with the realization that trauma continues in the present moment, even when the battle is over.”

Bachmann’s first book, Temper, was written after the author’s sister was murdered.
“With Do Not Rise, trauma has a more public face, the face of the soldier, and I found a natural and comforting counterpart in poetry written by soldiers,” Bachmann said. “I wanted to explore that dynamic. I even found my own poems beginning to address a soldier figure as a ‘companion’ as I moved through this landscape that had been changed by trauma.”

Bachmann notes that her new book illustrates how the language of war infiltrates the language of the poet. “Many of the poems are a confession of love, but it’s a love charged with the awareness of war’s trauma or another kind of violence,” she said.

“We all have moments in our life that change us.”

In Do Not Rise, Bachmann’s poems make use of extensive white space on the pages. “Those white spaces are an invitation for the reader to enter the poem, and to slow down, and consider each word as it’s distilled, which is way to heighten a word’s multiple meanings,” she said.

Many of the poems are paired based on their titles.

“The first poem in the book is ‘Crisis,’ and the last poem is ‘Energy,'” Bachman said. “In some ways, those two words circle back upon one another. One component of post-traumatic stress is repetition, how one image of idea comes back and triggers another thought. Another example would be the poem ‘Oil’ followed by one called ‘Spill.’ I was particularly attentive to that as I thought about the overall structure of presenting my work to the reader.”

Bachmann, who was born and raised near Philadelphia, majored in sociology at Loyola College in Baltimore, Maryland. She earned her master’s from the Johns Hopkins Graduate Program in Creative Writing.

“I think we all have moments in our life that change us,” Bachmann said. “The book is ultimately about that aftermath of an event, something that has altered perspective so radically. I hope to open up the poems to meanings beyond the specific territory of war.”

The dual reading by Bachmann and Earley is sponsored by the Vanderbilt’s Gertrude & Harold S. Vanderbilt Writers Series, which brings outstanding writers to campus each semester, and the Department of English.