Feminism in America: A televised revolution

The women’s liberation movement began to exist for most Americans in 1970, the year network television started to cover it in earnest. 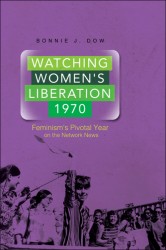 “The (television) coverage ranged from sympathetic to patronizing, from thoughtful to sensationalistic and from even-handed to overtly dismissive,” Dow said. “That deluge of coverage had a profound effect on the growth of the movement itself.”

In 1970, the three big networks (ABC, CBS and NBC) produced more than 20 reports on the women’s movement. Each sent reporters to multiple cities to cover the Aug. 26 Women’s Strike for Equality demonstration, the largest women’s movement event staged up to that point. The movement was never covered again with such attention in subsequent years.

“…1970 was the year that network news programs gave their most sustained attention to the (women’s movement) as a movement–as a public phenomenon with broad social implications and as a collective of diverse political actors working for social change,” Dow writes. “[rquote]The volume and variety of network coverage of the movement itself fell off sharply after 1970[/rquote] and shifted in perceptible ways as news reports became increasingly issue-centered around topics such as abortion, the ERA, rape law reform and various antidiscrimination actions spearheaded by institutionalized feminist interest groups.”

The conventional wisdom holds that the national news organizations were enemies of feminism at first, consistently framing feminism as illegitimate, deviant and unlike real women, said Dow, associate professor of communication studies and chair of the Department of Communication Studies at Vanderbilt University.

Dow reviewed one clip where a male correspondent uses feminist objections to the Playboy Club as an excuse to do a report from one of the clubs, complete with bunnies to ogle; another interviews “regular” women who comment that “so many of the feminists were just so unattractive.” Once, network news anchor Walter Cronkite dramatically rolled his eyes to show his distaste for a story about the women’s movement.

There were also even-handed reports.

“Radicals were more likely to be the subject of extreme close-ups, which violate expectations for interpersonal distance, signify hostility or distrust toward the subject, and contribute to an impression of deviance,” Dow said.

There were network news stories that showed women performing jobs that were supposedly impossible physically for them to accomplish, and even one or two that featured African American women in the workplace. Missing was any mention or sight of lesbians as part of the women’s movement.

“[rquote]Network news stories gave minimal attention to sexuality issues and their importance to the movement[/rquote], offering a picture that was both white and heterosexual at a time when many liberal and radical feminists identified as lesbian and the politics of sexuality were receiving a great deal of attention within the movement,” Dow said.

Despite the rather whitewashed version of feminism portrayed on television, Dow said the coverage is partially responsible for the spread of feminist institutions that now dot the nation such as battered women’s shelters, sexual assault centers, women’s health centers, women’s bookstores and women’s studies programs at universities.

For a review copy of Watching Women’s Liberation 1970: Feminism’s Pivotal Year on the Network News, contact Steve Fast at University of Illinois Press at 217-244-4689 or sfast@illinois.edu.