“Status of the graduate degree-granting institution should have a more important relation to earnings than status of the undergraduate institution,” said Joni Hersch, professor of law and economics at Vanderbilt Law School. “[But] even high ability students who attend nonselective institutions for their bachelor’s degrees are, on average, unable to overcome their initial placement by moving up to an elite graduate or professional school for an advanced degree.”

Hersch is author of, “Catching Up Is Hard to Do: Undergraduate Prestige, Elite Graduate Programs, and the Earnings Premium.”

Hersch used data from the 2003 and 2010 National Survey of College Graduates, which provides information on a representative sample of almost 178,000 college graduates, including more than 83,000 students earning graduate degrees.

Hersch compared the Carnegie Classifications to selectivity categories from Barron’s Profiles of American Colleges to divide schools into categories. Hersch also used various classifications with assistance from the  and to divide schools into categories. Roughly speaking, Tier 1 schools are top private research institutions. Tier 2 schools are selective private liberal arts colleges. Tier 3 are top public research universities and Tier 4 are remaining four-year universities and colleges. Because ability influences whether a student is accepted to a selective institution, Hersch accounted for ability in her study by examining graduates of similarly selective graduate programs.

Hersch’s research found that graduates of Tier 1 schools earn a lot more than everyone else.

But even when looking at those with graduate degrees from elite schools, the students who went to a lower tier undergraduate school earn considerably less. 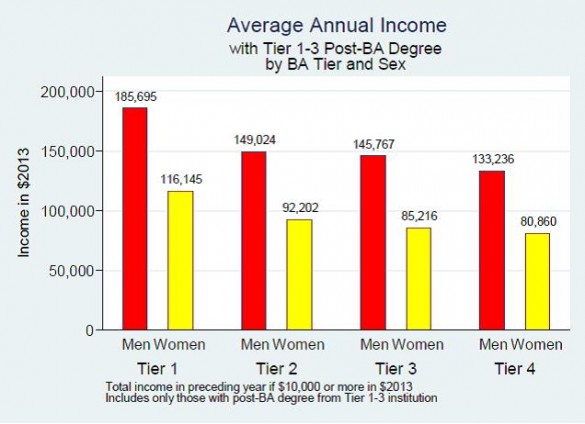 Moving up to graduate school

Hersch finds that where a student earns his or her bachelor’s degree is closely related to whether that student even goes to graduate school.

And of the small percentage of students from lower tier institutions who earn a graduate degree, a tiny number move up to a top tier graduate school.

“The odds of a Tier 4 student having a graduate degree from a Tier 1 institution are quite small with 3 percent among men and 2 percent among women,” writes Hersch.

The Carnegie classifications are based on factors such as the highest degree awarded; the number, type, and field diversity of post-baccalaureate degrees awarded annually; and federal research support. For example, Research I universities offer a full range of baccalaureate programs through the doctorate, give high priority to research, award fifty or more doctoral degrees each year, and receive annually $40 million or more in federal support.