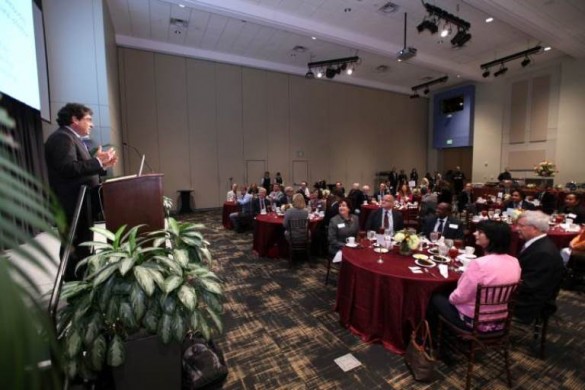 Ambassadors from more than 20 nations visited the campus of Vanderbilt University Oct. 31, and heard from researchers about progress in the fields of medical robotics and the fight against the Ebola virus.

“What we try to bring to bear is a sense of collaboration across all schools and disciplines,” said Vanderbilt Chancellor Nicholas S. Zeppos. “We do that because we think there are fundamental questions that our university must address for the good of humanity.”

The 26 foreign ambassadors were on a two-day tour of Nashville through this years’ “Experience America” trip sponsored by the Department of State. Among the nations represented with ambassadors were the Congo, Egypt, Peru, Sweden, Bangladesh, Iceland, South Sudan and Tuvalu.

“We’re from all around the world and yet we have found so much common ground,” Zeppos said. “I think there are amazing opportunities for finding the common humanity in all of us, and universities are performing amazing work to really seize those opportunities” on the local, regional, national and international levels.

The ambassadors heard from graduate student Andrew Flyak, who is working in the lab of Dr. James Crowe, director of the Vanderbilt Vaccine Center, about a possible Ebola vaccine.

“The human organism is amazing,” Flyak said. “Despite the severity of the (Ebola) disease, 50 percent of the people (who get it) survive the infection.”

Flyak, Crowe and other members of the team are exploring the use of antibodies from Ebola survivors to create a vaccine.

Benoit Dawant, Cornelius Vanderbilt Chair in Engineering, Electrical Engineering and Computer Science, followed with a primer on the collaboration of surgeons, computer scientists and engineers to improve surgical techniques.

“It’s hard to predict what surgical procedures will be like in the future, but we can certainly predict that it will become less and less invasive, that there will be more and more technology and the surgeon will interact with the technology rather than interact with the patient,” Dawant said.

While in the Nashville area, the ambassadors also toured the Hermitage, home of President Andrew Jackson, the Nissan manufacturing plant and visited the Grand Ole Opry. After leaving Vanderbilt, they were headed to the set of the television show Nashville.