A rare species of sunflower that has long been considered at risk for extinction was recently listed as an endangered species by the U.S. Fish and Wildlife Service. The whorled sunflower, or Helianthus verticillatus, is known to grow only in select prairie habitats of Western Tennessee, Northeastern Alabama and Northwestern Georgia. It began receiving “critical habitat designation” in these areas starting September 25, 2014.

The plight of the whorled sunflower was championed by former Vanderbilt graduate student Jennifer Ellis Mandel and Professor of Biological Sciences David McCauley as a result of work that began over 10 years ago. Due to low population numbers, the whorled sunflower had been a candidate for listing as an endangered species since 1999. However, Mandel’s dissertation research led to two seminal discoveries that elevated the whorled sunflower to a high priority candidate.

After the sunflower was first collected in 1892 in Tennessee, ecologists speculated the whorled sunflower was a hybrid of two species. Because hybrid species are a controversial topic for legal protection under the U.S. Endangered Species Act, the flower remained ranked as low priority for investigation. Mandel performed a population genetics study revealing the whorled sunflower is a distinct species and not of hybrid origin as was once thought. Secondly, her studies on genetic diversity found far fewer individuals existed across the populations than were previously reported. This body of evidence led to the eventual listing of the whorled sunflower as endangered.

As she reflects back, Mandel, who is now an assistant professor of biological sciences at the University of Memphis, said, “I remember people asking throughout the course of my graduate work things like: ‘Do you really think your research is going to make a difference? It’s just one plant. Sunflowers are endangered?’ I don’t think people were trying to be difficult, it’s just that these were honest and reasonable questions. I learned that people were very open to listening about the whorled sunflower’s predicament, and cared deeply, when they also learned that a number of plant and animal species occupying in the same dwindling habitat were rare or endangered. The biggest issue facing the whorled sunflower, as with many of our endangered species, is habitat loss.”

The benefit of achieving endangered species status is the designation of 1,500 acres of critical habitat for the whorled sunflower that will protect the areas that are necessary for its conservation. 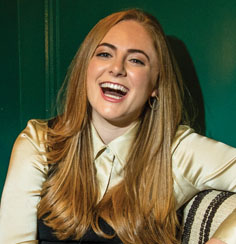 Lauren Mandel, BA’15: The Art of the Possible