To mark Campus Sustainability Day, October 22, Vanderbilt’s Sustainability and Environmental Management Office (SEMO) has released an updated inventory of the university’s greenhouse gas (GHG) emissions for the calendar years 2005 to 2013. 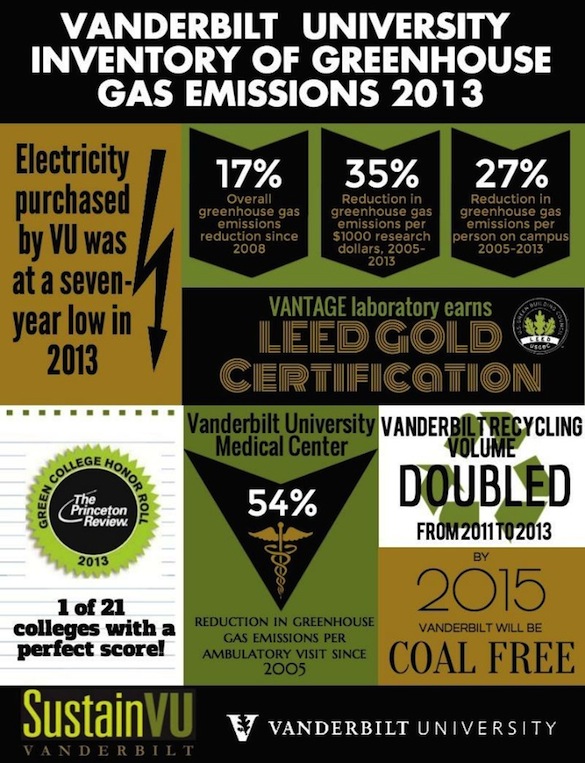 According to the accompanying report, GHG emissions from the campus and medical center decreased by 17 percent from the all-time high reached in 2008 and by 12 percent from 2005 to 2013. When Vanderbilt’s significant growth in square footage, students, patient care, and research dollars is taken into account, GHG emissions have been reduced by more than 27 percent per person on campus and by 35 percent per research dollar since 2005.

Quantifying GHG emissions over time allows the Vanderbilt community to better understand its own unique impact on the environment now and in the past and determine the most effective improvement strategies to implement in the future.

One major improvement already in the works is the conversion of Vanderbilt’s power plant from using a combination coal and natural gas to all natural gas. “The co-generation facility conversion to all-natural gas modernizes and improves the efficiency of our plant and will also significantly reduce our GHG emissions in the future,” said Mark Petty, assistant vice chancellor for plant operations.

Andrea George, SEMO director, said, “In addition to the power plant conversion, a large number of buildings on campus and in VUMC are being retrofitted to save energy and lower our GHG emissions for many years to come. These significant infrastructure improvements, coupled with a continued focus on LEED certification for our new construction will continue to drive down Vanderbilt’s energy consumption and GHG emissions moving forward.” 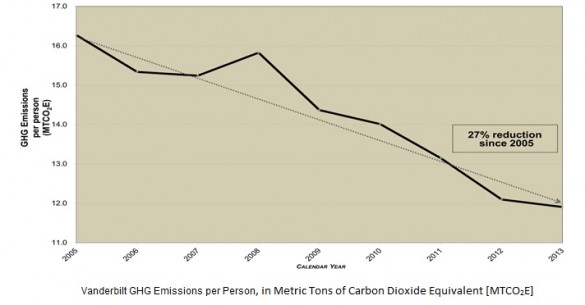 Vanderbilt emits GHGs primarily through building utility consumption, faculty, staff and student commuting behaviors and the disposal of waste. Overall GHG emissions did rise slightly in 2013 (by 2 percent) due to producing a greater share of our power on-campus as well as improved travel tracking.  Positive findings include Vanderbilt’s electricity purchases from Nashville Electric Service are at a seven-year low and VU’s recycling volume doubled in the past two years. The small increase in overall emissions in 2013 should reverse substantially as the power plant fuel conversion is completed in 2014 and Vanderbilt becomes a coal-free campus.

“We also hope faculty, staff and students are doing their part by turning off lights and powering down computers when not in use, reasonably adjusting thermostats throughout the year, recycling, and taking advantage of mass transit options to get to and from campus,” said George. 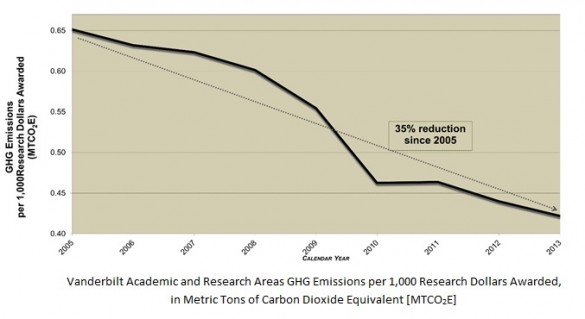 Vanderbilt’s Sustainability and Environmental Management Office (SEMO) compiled the report, which is available in its entirety on the SustainVU website.