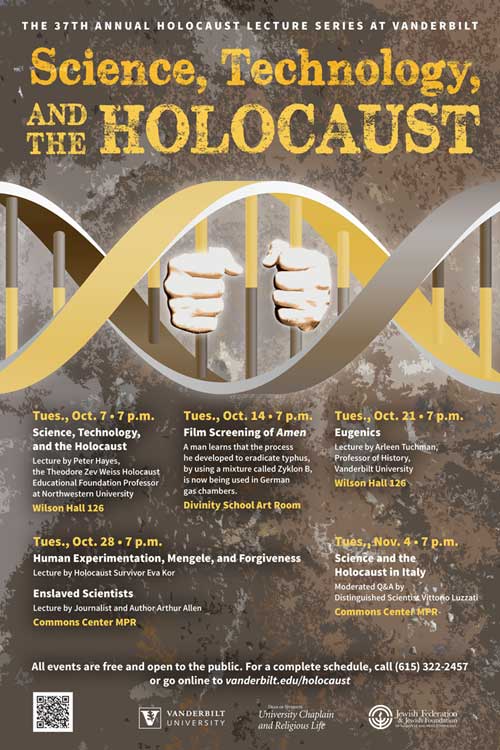 The 37th annual Holocaust Lecture Series at Vanderbilt University explores the role of science and scientists in relation to the Holocaust under the title “Science, Technology, and the Holocaust.” Events are free and open to the public.

The series, sponsored by the Office of Religious Life and the Jewish Federation & Jewish Foundation, is free and open to the public.

This year’s five events take place over the span of nearly a month, starting Tuesday, Oct. 7, and wrapping up Tues., Nov. 4. Events include six speakers, including Holocaust survivors, as well as a film screening.

Film Screening of Amen
A man learns that the process he developed to eradicate typhus, by using a mixture called Zyklon B, is being used in German gas chambers.
Tuesday, Oct. 14, 7 p.m., Divinity School Art Room

The series was established in 1977 by Beverly Asbury, then University Chaplain, and is the longest running Holocaust series on an American campus. Currently, it is run by a committee of faculty, staff and students, with Bess and University Chaplain Mark Forrester acting as faculty co-chairs, and Sam Lazaroff and Lucas Wilson as student co-chairs.