As a first-year student at Vanderbilt in 1951, Lee Ann Allen sat on the hillside and watched senior Charlie Hawkins pitch for the Commodores. There were no dugouts and no stands, just simple wooden benches for each team. She fell in love with Charlie—Vanderbilt’s first All-SEC baseball player—and then with Vanderbilt baseball.

The Hawkinses married in 1955 and had four children, including two who attended Vanderbilt: Bill Hawkins, BS’82, and Julia Ann Hawkins, MEd’03, MSN’07.

In 2002 the couple decided to make a lasting impact on the program they loved and made a significant contribution to the Vanderbilt baseball stadium project. Lee Ann remembers, “Before Charlie gave to the new stadium, he asked me and our children if we would allow him to make a generous gift to the baseball program. Our answer was a resounding yes!” Today Hawkins Field is one of the country’s premier college baseball stadiums.

Charlie, BA’54, played both baseball and football for the Commodores. He died in 2004, but his legacy lives on through Hawkins Field. “Charlie is always with us, and it continues to give me a thrill to see his name on the field and to remember how much he loved the game,” says Lee Ann. She knows Charlie was with the team when they made history this past summer.

Sixty-three years after she watched Charlie play for Vanderbilt, Lee Ann traveled to Omaha, Nebraska, with seven family members as the Commodores competed in the College World Series. Alongside a huge contingent of Vanderbilt fans, the Hawkinses supported the team at nearly every moment during the 10-day tournament.

The final game—and the winning home run by John Norwood in the top of the eighth inning—was every fan’s dream come true, and Lee Ann barely remembers the last few minutes of the contest. “When we won, my son, Bill, and I burst into tears and hugged each other hard. We hugged strangers. Pure bliss! Pure joy! Pride! We all just stood there in amazement—taking it all in and trying to absorb what had transpired: the national championship.”

From those early days on the hillside to Hawkins Field and Omaha’s TD Ameritrade Park, the Hawkins family has been a constant throughout the highs and lows of Vanderbilt baseball. Lee Ann says her family’s belief in the players, in Head Coach Tim Corbin, and in the power of a Vanderbilt education is the reason they continue to invest in the base-ball program.

Corbin says Lee Ann has had great influence on him and his wife, Maggie. “Lee Ann is an incredible soul, a role model for us. I’ll never forget seeing her in Omaha when we won, how much she loved that moment.”

The College World Series bracelet on Lee Ann’s wrist is a small token with big meaning. “The attention this championship has brought to the Vanderbilt program could not be purchased—it had to be earned. This championship confirms what I’ve known for a long time: There’s simply no better program in the nation.” 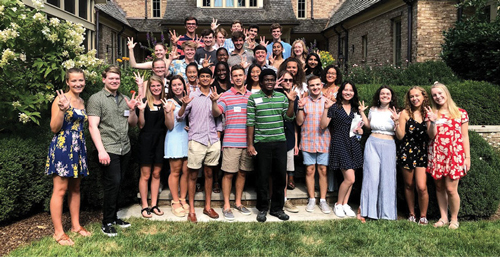