‘Who Stole the American Dream?’ author to discuss inequality in America

Update 6/23/14: This event has been postponed due to unforeseen circumstances. Please check back for updates.

The gap between the wealthiest Americans and the nation’s middle class will be discussed June 30 at a forum at The First Amendment Center at Vanderbilt that will include the Pulitzer Prize-winning author of Who Stole the American Dream?

Journalist Hedrick Smith will be joined by First Amendment Center founder John Seigenthaler and Larry Bartels of the political science department of Vanderbilt University to discuss “Inequality in America.”

“Today, the gravest challenge and the most corrosive fault line in our society is the gross inequality of income and wealth in America,” Smith writes in Who Stole the American Dream? “Not only political liberals but conservative thinkers as well emphasize the danger to American democracy of this great divide.” 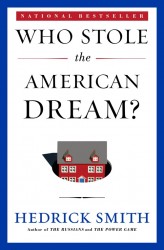 Called the “defining challenge of our time” by President Obama, income inequality happened when the top 1 percent of American households increased their income by about 275 percent between 1979 and 2007, compared to a gain of about 40 percent for the 60 percent in the middle class, according to a Congressional Budget Office study from 2011.

“The danger is that if the extremes become too great, the wealth dichotomy tears the social fabric of the country, undermines our ideal of equal opportunity, and puts the whole economy at risk – and more than the economy, our nation itself,” Smith writes.

“Inequality in America” is co-sponsored by the Center for the Study of Democratic Institutions at Vanderbilt and the First Amendment Center.