Arne Duncan on achievement gaps: ‘Where is the outrage?’

Outrage is the proper response to the achievement gaps in America, U.S. Secretary of Education Arne Duncan told a roomful of education reporters gathered for the Education Writers Association’s 67th National Seminar.

His talk was the capstone of the annual event, which was held at Vanderbilt’s Peabody College of education and human development May 18-20.

“We have all followed the backlash against Donald Sterling’s bigoted remarks—it’s a backlash that was entirely fitting,” Duncan said. “But as outraged as we are by the words of one man, where is the outrage over our nation’s achievement gaps and the fact that millions of our children still don’t receive equal educational opportunity?”

Education remains “the key civil rights issue of the day,” he said, stating that too little progress has been made since Brown v. Board of Education, handed down 60 years ago this week. 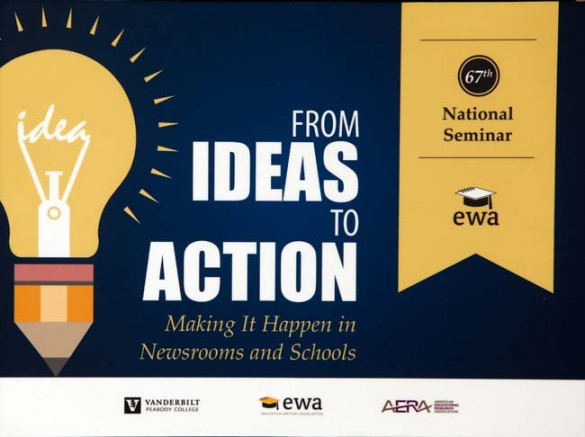 “When children aren’t getting the full benefit of educational technology because of their income or zip code, it’s an injustice,” Duncan said. “When students of color and students with disabilities are disproportionately suspended or expelled, and when that disciplinary action stems from discriminatory policies or practices, it’s a civil rights violation.”

He called for greater accountability among education stockholders, and decried those who would “dumb down” educational expectations for disadvantaged students, rather than encourage them and expect them to achieve.

Duncan praised Tennessee’s early adoption of the Common Core State Standards, and for significantly improving in the National Association of Educational Progress rankings over the past two years.

After his keynote, Duncan was interviewed on stage by NPR’s Steve Drummond and fielded questions from the audience.

Duncan then met with Peabody College faculty, including Patricia and Rodes Hart Dean of Education and Human Development Camilla Benbow, to learn more about the school’s nationally recognized education research.

“We were honored to host Secretary Duncan on the Vanderbilt campus,” Benbow said. “Under his leadership, districts, states and the federal government are innovating in many areas of education. We were delighted to be able to discuss with the secretary our own initiatives to improve teacher and principal preparation.”

Earlier in the conference during a lunchtime keynote address, Tennessee Gov. Bill Haslam gave attendees a rundown of the state’s educational journey.

He lauded Tennessee’s “most improved state” status since Common Core was implemented, and shared his disappointment over the decision to delay implementation of the Partnership for Assessment of Readiness for College and Careers.

Haslam spoke about Tennessee Promise, his recently passed free community college initiative, predicting it would “change the culture of the state.”

Reporters heard from a rich panel of researchers and top education stakeholders during the conference, including American Federation of Teachers President Randi Weingarten and Columbia Journalism School’s Professor of Journalism and Dean Emeritus Nicholas Lemann.

See a roundup of participant tweets at #ewa14.