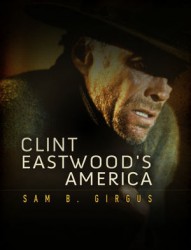 Clint Eastwood’s more recent films reflect not only an extraordinary new level of artistic achievement, but also keen insight into and understanding of the nature of American society and its search for meaning and purpose, according to Vanderbilt University Professor of English Sam B. Girgus.

Girgus, whose research-based interests include film and American literature and culture, is the author of Clint Eastwood’s America (Polity, 2014). The book traces the iconic film director’s career, beginning with the first 20 years of what Girgus calls Eastwood’s “Western state of mind” through a chapter on Flags of Our Fathers and Letters from Iwo Jima, which present a sharply critical representation of the new America that emerged from World War II.

Girgus will sign and discuss copies of Clint Eastwood’s America Tuesday, March 25, from 7 to 8 p.m. at Barnes & Noble at Vanderbilt, located at 2525 West End Ave.

While Girgus views Eastwood’s early films as “successful and important as popular entertainment and as mass media,” he believes that Unforgiven, the American Western that won the Academy Award for Best Picture in 1992, marked a significant turning point in Eastwood’s career.

“Unforgiven was an amazing breakthrough film that showed a poise, a timing, a depth, an intensity of character and theme that was exceptional to the point of becoming a masterpiece that transformed the Western genre and remade the meaning of the name of Clint Eastwood as a creative presence and cultural figure,” Girgus said. “[rquote]Eastwood was always serious about his craft, experimenting and learning what makes a film work and what makes it effective.[/rquote] What I think happened with Unforgiven is that all of that effort and commitment finally paid off.”

Girgus, who has also written and edited books on Woody Allen as well as other works on American and world film, sees somewhat of an opposing trajectory with regards to the career development and images of the two film icons. He notes that Allen’s early films, such as Annie Hall, Manhattan and Hannah and Her Sisters, included a strong interest in the ethical and moral relationships of the characters.

“Eastwood, at least in terms of public image, was viewed as making the exact opposite type of movie as Allen during their early careers,” Girgus said. ‘With films like A Fistful of Dollars and Dirty Harry, Eastwood was not perceived as being overly introspective and involved in ethical argument, other than as a kind of basic instinct for retribution and vengeance for evil actions and behaviors. You wouldn’t have thought of him as a director who chooses films that raise ultimate questions.”

Girgus notes that Allen’s films have taken on an increasingly dark, pessimistic and materialistic view of the world since the 1990s. Meanwhile, Eastwood, who has never evidenced a traditional religious point of view, seems to be “questioning our ordinary life and trying to find different ways of finding meaning in it.”

If Girgus had to make the difficult choice of selecting his favorite Eastwood film, it would probably be Mystic River or Million Dollar Baby, but he also has high praise for Flags of Our Fathers and Letters from Iwo Jima.

“Especially with Eastwood’s background in conservative politics, his unprecedented achievement of filming the opposing sides of the same historic World War II battle and conveying the dimension of the human tragedy was extraordinary,” Girgus said.

Free parking for Girgus’ book talk will be available in the 2525 garage behind Barnes & Noble at Vanderbilt. For more information on the event, email John Lasiter.