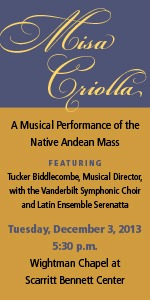 Vanderbilt University’s Center for Latin American Studies and Blair School of Music will bring to life Misa Criolla – a performance of musical works by the late Argentine composer and pianist Ariel Ramírez – Dec. 3 in Wightman Chapel.

The concert, on the campus of the Scarritt-Bennett Center, will begin at 5:30 p.m. It is free and open to the public.

The English translation of Misa Criolla is Creole Mass. The term refers to a mass that uses the language and music of the common people.

“Traditionally, celebration of the Catholic Mass in Latin America was quite European, with scripture readings in Latin understood by only a small number of people,” said Claire González, assistant director for outreach at the Center for Latin American Studies. “Ramírez’s work represented a new manner of worship that included both the language and the music of the common people and encouraged greater lay participation in the liturgy.”

González noted that this kind of empowerment, endorsed by the Second Vatican Council, was the basis for the international and interdenominational Liberation Theology movement that supported the struggle of the poor for freedom and social justice.

Tucker Biddlecombe, associate professor of choral activities at Blair, will serve as musical director for this event, which includes the Vanderbilt Symphonic Choir and Serenetta, a local Latin ensemble led by Vanderbilt alumnus Pablo Garzón.

Fernando Segovia, the Oberlin Graduate Professor of New Testament and Early Christianity, and Helena Simonett, associate director of the Center for Latin American Studies, will offer commentary during the performance to provide context and information about the musical works.

The last time Misa Criolla was performed for the local community was 2010.

For more information, email the Center for Latin American Studies or call 615-322-2527.