Award-winning scientist, author and educator Sean B. Carroll will illuminate the never-before-told account of the intersection of two of the most insightful minds of the 20th century, biologist Jacques Monod and writer and philosopher Albert Camus, during a Nov. 19 Chancellor’s Lecture at Vanderbilt University.

Carroll will discuss his book Brave Genius: A Scientist, a Philosopher and Their Daring Adventures from the French Resistance to the Nobel Prize  from 5:30 to 6:30 p.m. Tuesday, Nov. 19, in the Vanderbilt Central Library Community Room. A reception and book signing will precede the lecture from 4:30 to 5:30 p.m. in the Central Library main lobby. Both events are free and open to the public, with seating for the lecture limited and available on a first-come, first-seated basis. 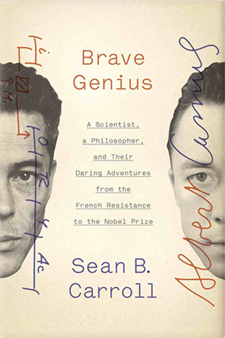 Drawing from a wealth of previously unpublished materials, Carroll will reflect on Camus’ and Monod’s roles in the Resistance following the Nazi occupation of France and the twists of circumstance that led to their friendship, as well as their roles as leading voices of modern literature and biology and eventually as Nobel Prize recipients in their respective fields.

Monod was active in the French Resistance, eventually becoming the chief of staff of the French Forces of the Interior. He shared the Nobel Prize in Physiology or Medicine in 1965 “for discoveries concerning genetic control of enzyme and virus synthesis.”

Camus, author of The Stranger whose views contributed to the rise of the philosophy known as absurdism, joined the French Resistance cell Combat, which published an underground newspaper of the same name. Camus became the paper’s editor in 1943. In 1957 he was awarded the Nobel Prize in Literature “for his important literary production, which with clear-sighted earnestness illuminates the problems of the human conscience in our times.”

Carroll is the Allan Wilson Professor of Molecular Biology and Genetics at the University of Wisconsin–Madison, vice president for science education at the Howard Hughes Medical Institute and a member of the National Academy of Sciences. The recipient of the 2012 Benjamin Franklin Medal in Life Sciences, he is at the forefront of a field known as evolutionary developmental biology, or “evo devo.” Carroll is the author of Remarkable Creatures: Epic Adventures in the Search for the Origins of Species, a 2009 finalist for the National Book Award. Other works include The Making of the Fittest: DNA and the Ultimate Forensic Record of Evolution and Endless Forms Most Beautiful: The New Science of Evo Devo and the Making of the Animal Kingdom.

Parking for the event will be available in the Wesley Place Garage, located at 21st Avenue South and Scarritt Place.

The Vanderbilt Chancellor’s Lecture Series strives to connect the university and the Nashville community with intellectuals who are shaping our world. For more information about the series, visit vanderbilt.edu/chancellor/lecture-series, email cls@vanderbilt.edu, call (615) 322-0885 or follow on Twitter @VUCLS.