After Colleen Conway married in 1984, she signed an informal written agreement with her husband, Ted Welch, stating that she would resign as dean of the Vanderbilt University School of Nursing after five years.
Eight years later Welch tore up the agreement and handed her the pieces.

Conway-Welch, after 29 years as dean, is stepping down at the end of the academic year. She is the second-longest sitting dean of any U.S. nursing school. But her legacy isn’t simply a measurement of time. It is reflected in the indelible impact she’s made on the school she loves, the world of nursing, and the many people she has inspired along the way.

[quoteit]“Colleen’s contributions to Vanderbilt have been enormous. Her vision for innovation in advanced practice training for nurses has set a national standard and has made Vanderbilt a leading destination for nursing education and research.”[/quoteit]

“Colleen’s contributions to Vanderbilt have been enormous,” says Dr. Jeff Balser, MD’90, PhD’90, vice chancellor for health affairs and dean of the School of Medicine. “Her vision for innovation in advanced practice training for nurses has set a national standard and has made Vanderbilt a leading destination for nursing education and research.”

Nearly three decades ago Conway-Welch filled her car with most of her worldly possessions in Colorado and headed for Nashville as the incoming dean of a nursing school that was on the brink of closing.

“On the drive out, even I thought I was crazy for making this leap,” she recalls. “I was a divorced, Irish-Catholic, 40-year-old professional woman with no Southern connections or music skills, going to Nashville. It felt like an incredible risk. Then I told myself it was just another adventure.”

She accepted the position with two stipulations. First, the undergraduate program would have to be overhauled. Second, the school would have to move from underneath the umbrella of the provost and instead report directly to the Medical Center vice chancellor for health affairs, at that time Dr. Roscoe R. (Ike) Robinson.

She thought she would serve the School of Nursing for about five years, enough time to rejuvenate it with the new accelerated “bridge”-to-master’s program—the original idea for which she credits Jean Watson, dean of nursing at the University of Colorado in the early 1980s.

[featurefullquote]“Sometimes you can’t do things in increments,” Conway-Welch says. “You have to just find the window and drive the truck through it.”[/featurefullquote]

“Sometimes you can’t do things in increments,” Conway-Welch says. “You have to just find the window and drive the truck through it.”

One of those cases was the decision by her and the nursing school faculty no longer to admit freshmen into the program. “I woke up in a cold sweat the night before telling the registrar,” she remembers, “but we needed to press on.”

She believes the biggest contribution she has made during her professional career is development of the bridge program, in which students are availed several different entry points toward earning their master’s degrees in the science of nursing. Today accelerated programs are common and flourishing around the country.

From the start Conway-Welch knew her primary responsibility was to increase the value of a nursing degree from Vanderbilt. “That’s what I set out to do, and that’s what I’ve done,” she says. VUSN currently ranks 15th nationally among graduate schools of nursing in the latest U.S. News & World Report rankings, in addition to several high-ranking specialty programs.

Ironically, one of her very first fundraising visits was also one of her most successful. The night before she was to call on Ted Welch, a prominent local businessman and the father of a Vanderbilt nursing student, Conway-Welch recalls preparing for the encounter in her Green Hills condo. She wrote down all the key points and practiced her delivery in front of the mirror for hours.

The next day, 10 minutes into the meeting, Welch agreed to give the school the amount requested. Colleen thanked him, but rattled on with her presentation.

Their next meeting was a dinner date. The two married just three months later.

There is no question Conway-Welch ushered in an era of nursing education reform at Vanderbilt that continues today. Her ability to see what is on the horizon for nursing, and to help set the stage through educational opportunities, preparing VUSN’s graduates for an ever-changing health care environment, have been hallmarks of her career.

“Colleen has done things as a dean that really have not been done in any other place,” says Linda Norman, the Valere Potter Menefee Chair in Nursing and senior associate dean of academics. “She sets the bar, particularly for private-school deans, for the scope of things we should be involved in beyond academics, research and a little practice. We have been one great big demonstration project.”

[quoteit]“Colleen is always moving to the next horizon. She saw things and continues to see things the rest of us don’t always see clearly. She has pushed and dragged us into the next decade and into the next century.”[/quoteit]

During her deanship, the school’s faculty practice network has flourished, starting when Bonnie Pilon, professor of nursing and senior associate dean for clinical and community partnerships, came on board in 1989. The network now includes several clinics in underserved neighborhoods, two nurse-midwifery clinics, a school-nurse contract with Metro Nashville–Davidson County and others. These sites improve access to health care for patients and serve as places for students to gain valuable clinical experience.

“Colleen is always moving to the next horizon,” says Pilon. “She saw things and continues to see things the rest of us don’t always see clearly. She has pushed and dragged us into the next decade and into the next century.”

Her vision and leadership resulted in the school’s academic progress. Realizing the need to provide nurses with doctoral education, Conway-Welch opened the Ph.D. program in 1993 and the doctor of nursing practice (D.N.P.) program in 2008.

Before others considered how technology could offer new options for curriculum delivery, Conway-Welch saw it as the wave of the future. Today, VUSN is known nationally as a role model for successful use of information technology. More than half of its 1,000 currently enrolled students are educated via blended distance-learning programs, spending part of their class time physically at VUSN and the rest in clinicals and classes online.

“When Colleen first recruited me here in 2000, her comment was, ‘I need some senior leadership in this area because we need to know what to do next. I trust you to figure that out,’” says Betsy Weiner, Centennial Independence Foundation Professor of Nursing and senior associate dean for informatics.

As Conway-Welch rejuvenated VUSN, people across the country took notice. She has become a national leader in the world of health care, never shying away from difficult or controversial issues. When addressing students at graduation, she tells them that with a nursing degree, they can be entrepreneurs, policymakers, advocates and more. She says it because she has lived it.

In 1988, President Ronald Reagan named her to the Presidential Commission on Human Immunodeficiency Virus Epidemic, a bipartisan commission on the HIV epidemic. In 1997 she was elected into the Institute of Medicine of the National Academies. In 2006 she was appointed by President George W. Bush for a five-year term on the board of regents for the Uniformed Services University of the Health Sciences. She is a fellow in the American Academy of Nursing.

“Dean Conway-Welch has made contributions in all areas of nursing, but her support of nursing research has been extraordinary,” says Ann Minnick, the Julia Chenault Professor of Nursing and senior associate dean for research. “During her involvement in the national leadership effort, the National Institute of Nursing Research was established. Her unwavering support of science, especially in the areas of postdoctoral fellowship, has resulted in increased numbers of nurse scientists whose discoveries have positive effects on patients, families and communities.”

“The thing I admire most about her is her commitment to the work being done here and its impact on society and health care in general,” says Becky Keck, assistant professor of nursing, senior associate dean for administration and operations, and chief administrative officer at VUSN. “She has been a very active advocate for nursing policy and for public health issues on state and national levels.”

Conway-Welch will continue to serve as a member of the Vanderbilt faculty, working with her successor and Balser, in support of the School of Nursing and nursing and health policy issues. 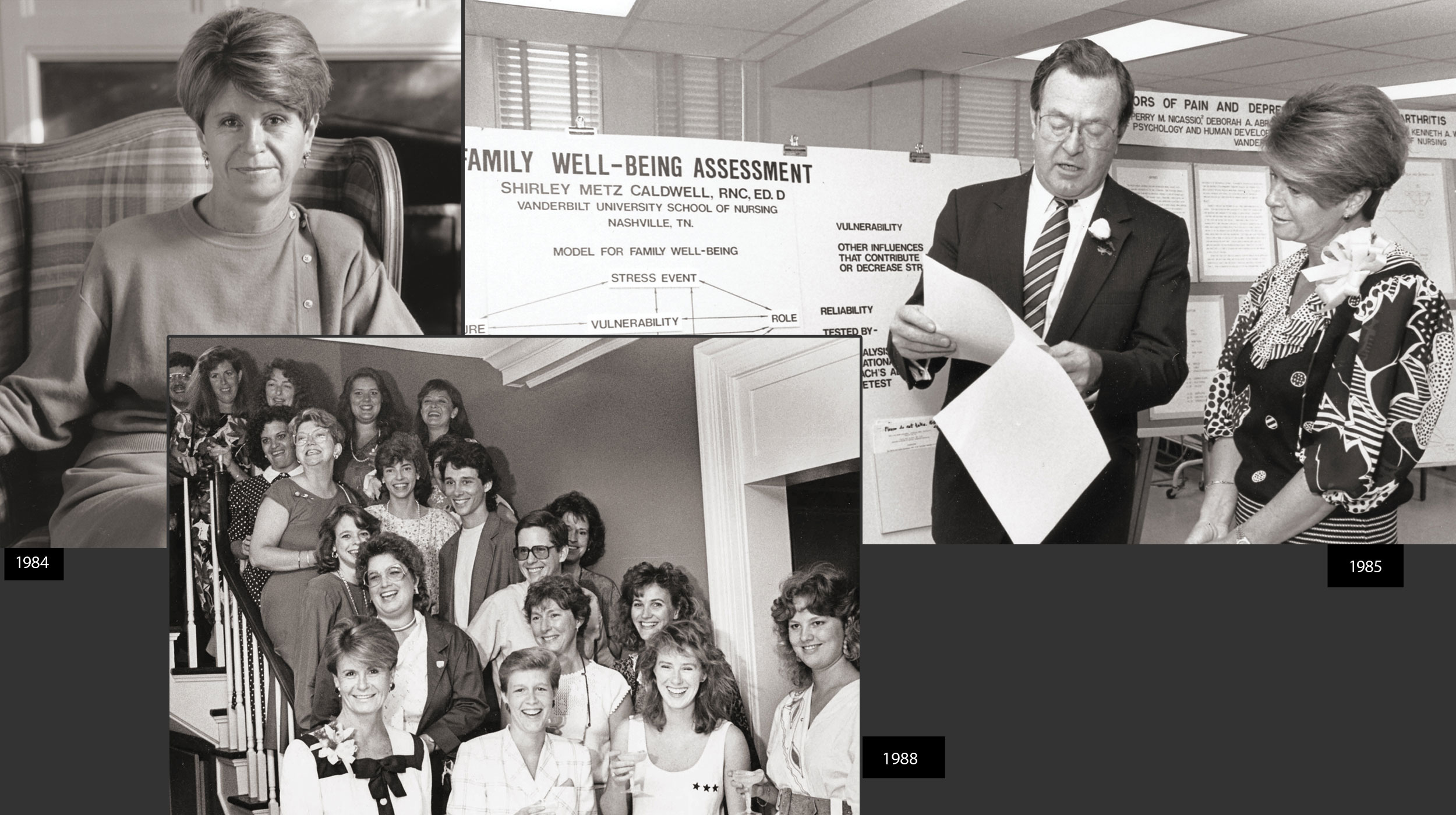 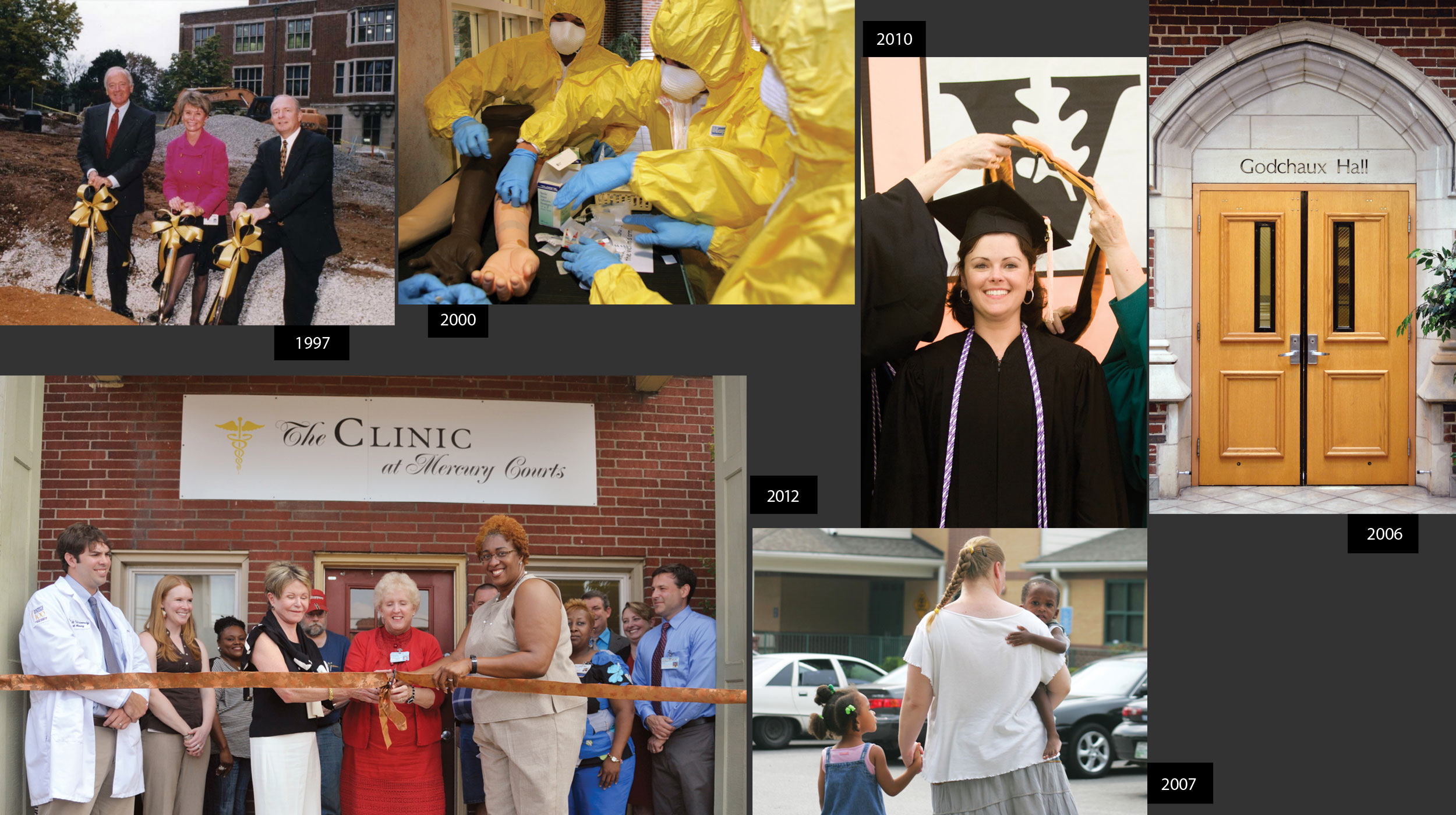