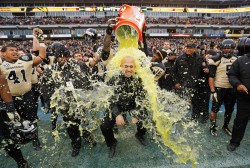 Following the appointment of David Williams II as vice chancellor for athletics and university affairs and athletic director in July 2012, Vanderbilt continued its streak of athletics successes, including the Commodore football team’s defeat of in-state rival Tennessee at home for the first time in 30 years, a victory in the Music City Bowl, and ending the 2012 season ranked in the top 25 nationally. Winning extends to nearly every team