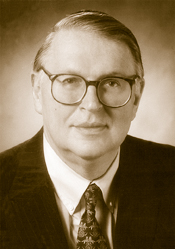 William W. Featheringill, a Vanderbilt University Board of Trust member, alumnus and entrepreneur for whom Vanderbilt’s Featheringill Hall is named, died Sunday, Dec. 9. He was 70.

A memorial service is scheduled for 2 p.m. Thursday, Dec. 13, at Independent Presbyterian Church, 3100 Highland Ave. S., Birmingham, Ala. Visitation will be prior to the service from noon to 2 p.m. at the church.

“Bill’s business knowledge, entrepreneurial vision and love of Vanderbilt provided guidance and a valuable voice on the Board of Trust,” said Vanderbilt Chancellor Nicholas S. Zeppos. “He could look at a problem and see an opportunity—and then find a way to make that opportunity happen for the good of the university. But it is his support of Vanderbilt and its students that will long remind me of his powerful impact and willingness to help others. The scholarships he established in the School of Engineering and in athletics have and will continue to transform the lives of students for generations to come.”

Former Dean Kenneth F. Galloway said he was honored to call Featheringill friend. “Bill was a wonderful School of Engineering alum whose dedication to, and concern for, the school has made it a better place,” Galloway said. “He has been a true friend; I will miss him.”

A native of Birmingham, Featheringill graduated from Vanderbilt University School of Engineering in 1964 and served with the U.S. Navy SEABEES in Okinawa, California and Vietnam. Upon his discharge from the Navy, he earned a law degree and an MBA from Columbia University before returning to Birmingham to work in health care management. In 1973, Featheringill co-founded Private Capital Corporation, which specialized in private investment in small companies. As its president, he established and led a variety of companies, primarily in health care, biotechnology, information technology and management systems.

At the time of his death, he was chairman of Electronic Healthcare Systems Inc. and Momentum Business Solutions Inc., and served as a director of Southern Research Institute. As an entrepreneur, he received CIO Magazine’s Enterprise Integration Award and the Birmingham Venture Club Investor of the Year Award; two of his companies were named most outstanding venture-backed companies by the Venture Club.

Featheringill was a vital and enthusiastic Vanderbilt supporter, serving on the Vanderbilt Engineering Alumni Council, National Committee of the Campaign for Vanderbilt, Shape the Future Campaign Steering Committee, Vanderbilt Children’s Hospital Phase I Building Campaign Committee, Alumni Board of Directors, School of Engineering’s Committee of Visitors and Vanderbilt University Medical Center Board. He served on the Board of Trust since 1998 and was a member of its executive committee from 2001-07.

It was Featheringill’s love for the School of Engineering that Philippe Fauchet, dean of the School of Engineering, noted. “I met Bill only once, a few weeks after I became dean. He graciously invited me to lunch in his hometown of Birmingham,” Fauchet said. “When we met, Bill shared many fond recollections of his days as a student and his love for the school, which—he didn’t say, but I know—helped transform it into one of the country’s major schools of engineering.”

He is survived by his wife, Carolyn; a daughter, Elizabeth F. Pharo; son-in-law Andrew Pharo; and three grandchildren, as well as a brother and sister-in-law, Dr. John P. K. Featheringill and Regina Featheringill, and several nieces and a nephew.