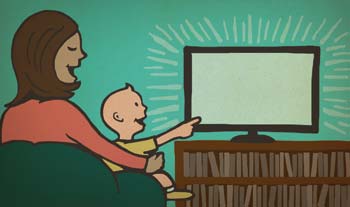 Children learn more from television viewing when parents participate as they would during book reading, new research from Vanderbilt finds.

In a first-of-its-kind study, children showed significant gains in vocabulary and comprehension when parents asked them questions about the content, rather than simply parking them in front of the screen.

“There is a lot of controversy over whether small children will learn from videos,” said Gabrielle Strouse, Peabody College researcher. “Parents are naturally stopping and talking with their children about storybooks, but they aren’t doing that with videos.

“What if we did the same thing with videos – then would children learn from them?”

With this question in mind, she predicted parent mediation during television watching could enhance learning because the dialogue would increase the effort children put into understanding the program. Further, parents could help them interpret the information viewed and offer feedback on the content.

To test the hypothesis, 81 parents of three-year-olds were provided DVDs of children’s stories to watch over four weeks. Children were pre- and post-tested on vocabulary words from the stories and completed a post-test on story comprehension.

The families were assigned to one of four conditions:

Children in the dialogic questioning group scored significantly higher than the other groups on the post-tests of vocabulary and comprehension. The directed attention and regular video groups performed lowest on the tests, with scores from the dialogic actress group falling in the middle.

Strouse conducted her research under the direction of Associate Professor of Psychology Georgene Troseth, who says the study shows videos can be useful – but beware: Television is no substitute for mom and dad, her previous research finds.

“When kids are very small, especially babies, toddlers and those first pre-school years, it isn’t natural and easy for them to learn from videos, so they’re going to learn a lot more if you are there helping them, just like you would help them with a book,” Troseth said. “Don’t give them a steady diet of flopping in front of the television and thinking that is going to somehow educate them.”

Troseth says Strouse’s latest research is exciting news for parents however because it offers them techniques for making tube-time more educational.

Strouse developed a video to demonstrate how parents can ask questions for best learning but says any parent can practice the techniques. “It is really sitting with your child, talking with your child and getting them involved telling parts of the story,” she said.

Studies show once children get into grade school, they can learn by watching videos on their own. Strouse says more study is needed to see if having an actress on screen asking questions helps the very young learn from videos.

Gabrielle Strouse developed a video on dialogic questioning that is available at: http://vanderbi.lt/dialogic.