Listen: Vanderbilt senior to read from her published novel

Kat Zhang, a senior in the College of Arts and Science, will read from her new novel, What’s Left of Me (HarperCollins), at 7 p.m. Thursday, Sept. 27. The reading, which is free and open to the public, will be in Buttrick Hall, Room 101.

Zhang, who is majoring in English, completed What’s Left of Me during her first year on campus. The book is the first in a young adult trilogy called The Hybrid Chronicles.

In What’s Left of Me, the plot revolves around Eva and Addie, two souls woven together in one body. Eva and Addie would take turns learning to walk and control other movements. This is considered typical for children in Zhang’s story, but one of the souls is expected to fade and disappear over time. However, Eva does not go away, continuing to live in secret within the body of her dominant soul. She puts herself and Addie at risk of being locked away if the government discovers she is a “hybrid.” 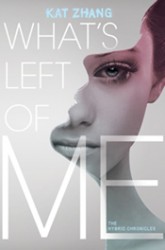 Zhang, who began writing her first novel when she was 12, said that the inspiration for What’s Left of Me came from the narrative device known as the voice-over in television shows and movies. It enables the audience to hear the voice inside the character’s head. Zhang wondered what it would be like if the voice was actually another person, and the story evolved from that.

A book trailer for What’s Left of Me was done by Mainstay Productions, which also did the video promos for The Hunger Games trilogy. The second novel of The Hybrid Chronicles is expected to be released in fall 2013.