This summer, biophysicist Erin Rericha and her student Jie Zhao spent an intensive 12 days in Shanghai demonstrating various inexpensive methods that graduate students and young faculty members from developing countries can use to study how cells move.

Her cell migration session was part of The Hands-On Research in Complex Systems School, a program that believes passionately that small scale, table-top experiments are invaluable in both practicing and teaching science.

“Physics is an experimental science, but lack of support in the developing world means that scientists rely increasingly on inexpensive computer simulations instead of experiments,” said the assistant professor of physics. “The purpose of these meetings is to show the value of hands-on experiments, done in conjunction with computer simulation, to scientists from these areas and to demonstrate that important research at the frontiers of science can be done without expensive equipment.”

This is the second Hands-On summer school that Rericha has attended, each of which has been held on a different continent. The latest meeting attracted 75 participants from 18 countries.

“The reason I’m involved is that one of the organizers is Harry Swinney,” said Rericha. “He was my doctoral advisor and his students would do anything for him.” Swinney is a professor of physics and director of the Center for Nonlinear Dynamics at the University of Texas at Austin.

The school that Swinney started with Rajarshi Roy at the University of Maryland and Kenneth Showalter at West Virginia University, has been adopted by the Abdus Salam International Centre for Theoretical Physics in Trieste, Italy. The Shanghai meeting was also sponsored by the Shanghai Jiao Tong University and the National Science Foundation.

“I was really impressed by the wide range of easy-to-set-up experiments that were demonstrated,” said Zhao. “It was a very good experience. I made a lot of new friends.”

One of the demonstrations made the local news when the scientists turned a traditional acrobatics and Kungfu performance called “Bricks Break on Body” into an experiment designed to show the principle of inertia – to move a large mass you need a large force. Swinney, who is small and thin, was asked to lie on the floor while two other scientists piled more than 150 pounds of concrete blocks on his body. Then Michael Schatz from the Georgia Institute of Technology enthusiastically wielded a sledge hammer to strike the top of the concrete blocks. Because there was only enough energy in the hammer’s blow to produce a very small motion on the part of the heavy blocks, the scrawny physicist underneath was unharmed.

“The problem of replacing experiments with simulations isn’t limited to the developing world,” said Rericha. “The same thing is happening in science education in the United States. I’d like to start a similar program with the schools here in Nashville.” 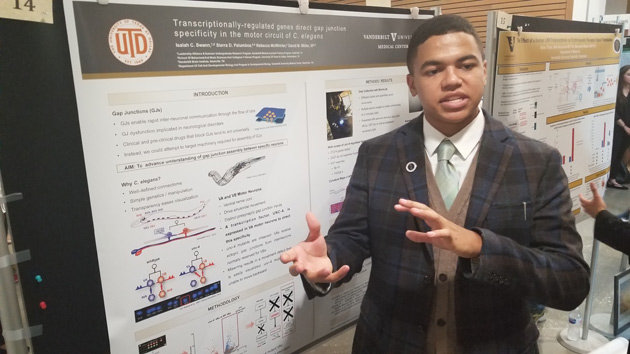