Research also shows “endowment effect” can be turned on and off

Groundbreaking new research in the field of evolutionary analysis in law not only provides additional evidence that chimpanzees share the controversial human psychological trait known as the “endowment effect” – which in humans has implications for law – but also shows the effect can be turned on or off for single objects, depending on their immediate situational usefulness.

In humans, the endowment effect causes people to consider an item they have just come to possess as higher in value than the maximum price they would have paid to acquire it just a moment before. Economists and lawyers typically assume this will not be the case. And some consider the endowment effect a human-centered fluke, subject to widespread and seemingly unpredictable variation. The origins of the quirk, and satisfying explanations for how it varies, have proved elusive.

In this new research, Vanderbilt University professor Owen Jones, who is one of the nation’s few professors of both law and biology, and evolutionary biologist Sarah Brosnan of Georgia State University, developed and tested predictions rooted in evolutionary theory about when and how the endowment effect would appear.

Drawing on prior theoretical work by Jones on the evolution of seemingly irrational behaviors, Brosnan and Jones found consistency between chimpanzees and humans with respect to the existence of the endowment effect and, more importantly, showed that variations in the prevalence of the effect could be predicted.

“These results strongly support the idea that the endowment effect reflects the deep influence of evolutionary processes – notably natural selection – on psychological predispositions that affect how brains ascribe value to objects. The endowment effect, and several other seemingly quirky psychological predispositions, may trace to the sharp differences between modern environments and ancestral ones, in which these predispositions may once have minimized losses and maximized gains,” said Jones, the New York Alumni Chancellor’s Chair in Law, professor of biological sciences and director of the MacArthur Foundation Research Network on Law and Neuroscience.

In humans, the endowment effect can be demonstrated in experiments when preferences between two equally available objects are separately compared to the choices people make when they own one of the objects and have the opportunity to trade it for the other. Typically, far fewer trades take place than economists would expect, given the preferences expressed under the choice condition.

In a prior study Jones, Brosnan and colleagues predicted and found that chimpanzees exhibited an endowment effect; that the effect varied between classes of objects; and that trades among evolutionarily significant objects, like foods, elicited stronger endowment effects than trades among less evolutionarily significant objects, such as toys. That is, chimpanzees were far more likely to keep their less preferred food when they could trade it for a more preferred food than they were to keep their less preferred toy when they could trade it for their more preferred toy.

In the present study, Jones, Brosnan, and colleagues made an even narrower prediction. They predicted that chimpanzee behavior would change for the same non-food item, in this case a tool, depending on whether that tool could be used to immediately obtain food.

In this study, the chimpanzees were given a choice of two tools. Each tool could be used to obtain one of two specific foods which could not be obtained without a tool. The tool pairs were tested in three situations:

Jones and Brosnan tested the chimpanzees to see how many showed an endowment effect by keeping their less preferred tool when they could have traded for the tool they preferred more in an earlier test. 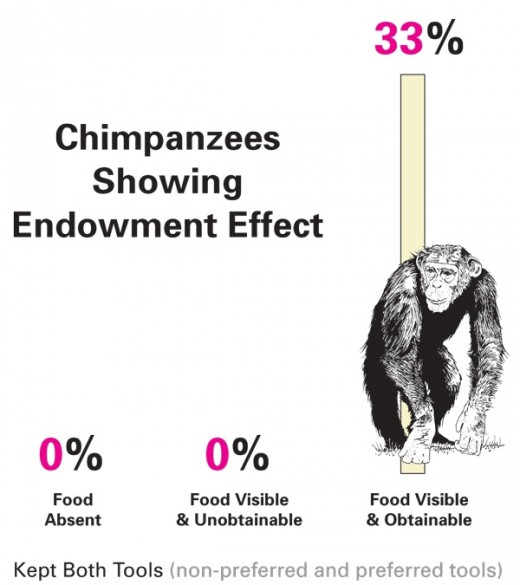 Specifically, as soon as chimpanzees could access a food many of them suddenly began keeping whichever tool they were endowed with, regardless of whether they could exchange if for their more preferred tool. Conversely, when the food was either absent or present and unobtainable, there was no endowment effect, and chimpanzees traded tools freely.

Impact of research for humans

This study, like Jones and Brosnan’s prior study of chimpanzees, provides further evidence that humans are not the only species to show biases of this sort and that the endowment effect likely evolved prior to the human split from other species.

“This has two implications,” said Jones. “First it is clear that we can learn about the development and function of human biases by studying other species. Second, the presence of patterned and predictable endowment effects in close relatives suggests that the effect is not just a quirk, but is likely a robust and widespread feature that evolved in primates to minimize the risks of loss under conditions of uncertainty. This in turn suggests that many specific and patterned cognitive quirks already identified in humans may be connected, in a previously hidden way that evolutionary perspectives can illuminate.”

This research can also provide a deeper understanding of where law-relevant behavior comes from and what factors affect it in predictable ways.

“This could expose previously hidden patterns in the human decision-making architecture—not only with respect to the endowment effect, but also with respect to the entire suite of human biases,” said Jones. “And that, in turn, could help the legal system to predict, anticipate, and respond to human behaviors that pose problems for law.”

The study, titled “Evolution and the expression of biases: situational value changes the endowment effect in chimpanzees” can be found in the current (March) issue of the journal Evolution and Human Behavior.