Groundbreaking new legal research from a team of Vanderbilt University and other researchers suggests that juror confusion over how to apply the Model Penal Code in criminal trials could cause major, unnoticed and life-altering sentencing errors.

The research found that although people are reasonably good at identifying two distinctions among the mental states used to determine blameworthiness, they generally could not tell the difference between two other crucial mental states. And that could lead to sentences that are too lenient or too harsh.

This study provides the most rigorous test of the Model Penal Code in the 50 years it has been in use. The research is published in the November issue of the New York University Law Review. The researchers are Vanderbilt’s Owen Jones, one of the nation’s few professors of both law and biological sciences; Rene Marois, a neuroscientist in the psychology department at Vanderbilt; Francis Shen, formerly a visiting legal scholar at Vanderbilt—now at Tulane; Joshua Greene, a psychologist at Harvard; and Morris Hoffman, a state trial judge in Denver.

The Model Penal Code strongly influences the criminal laws in the majority of states in the United States. One of the reasons the Model Penal Code has been considered so valuable is its use of standardized terms to describe the four specific mental states that can create criminal responsibility. Jurors are often called upon to sort a guilty defendant’s past mental state into one of the four categories, which in turn defines the nature of the crime, and therefore exerts powerful influence on sentencing.

Even when supplied with the definitions of the four mental states, as jurors routinely are, the subjects in this new study simply failed to reliably distinguish between knowing conduct and reckless conduct.

“The punishment levels associated with knowing crimes versus reckless ones can vary tremendously – enough in some cases to make the difference between dying in prison and being free,” said Jones. “[rquote]For example, in Colorado the difference can be as large as a criminal defendant being sentenced, for the very same act, to either 48 years in prison on one hand, or probation on the other.”[/rquote] The researchers said the potential for this confusion to lead to misclassification errors among jurors could affect many criminal trials, especially murder cases, and could exacerbate prison overcrowding, or alternatively result in prisoners being released too early.

Jones gives this analogy on how integral and influential these definitions in the Model Penal Code are to the court process, “If the Model Penal Code assumes that average jurors can distinguish between knowing and reckless conduct and in fact they can’t, it’s a bit like discovering that one of the core assumptions underlying the legal system’s reliance on DNA identification was simply wrong. But instead of the wrong person going to prison, the right person goes for the wrong amount of time.”

How The Experiments Work:

In these experiments, researchers asked subjects to read hypothetical scenarios and to make decisions—like those of jurors in criminal trials.  Sometimes they were also asked to choose a suitable punishment level. The hypotheticals varied by harm and by the level of culpability. Importantly, the researchers were able to control for harm, so they could detect whether people really could tell the difference between the four categories of mental states. Current law assumes jurors can do this.

In this graph, if the Model Penal Code’s assumptions were correct, none of these five lines would cross. When two lines cross regularly, as the two colored lines here do, serious miscarriages of justice can become common – particularly in homicide cases. Jones and his coauthors believe that this evidence of confusion, if replicated, warrants consideration of possible reforms. 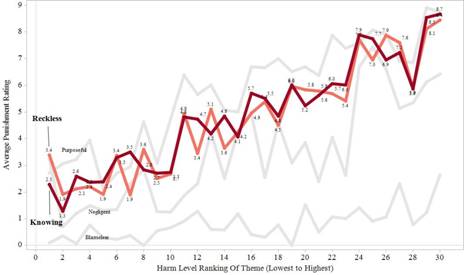 Misunderstanding or misapplying the Model Penal Code mental state definitions could have the most damaging impact in murder cases, where categorizing the mental state is a high-stakes proposition. For example, many states define second degree murder as a knowing killing, and manslaughter as a reckless killing. These two different kinds of murder typically carry vastly different levels of punishment. The punishment for second degree murder often involves a mandatory prison sentence of decades, if not life; the punishment for manslaughter often involves the possibility of probation.

“When sentencing, judges could be unwittingly implementing juror confusion, sending some people to prison—and letting others free on probation—on the basis of distinctions a jury just doesn’t get,” said Jones.

The study comes from the MacArthur Foundation’s Law and Neuroscience Project, which is based at Vanderbilt and led by Jones.