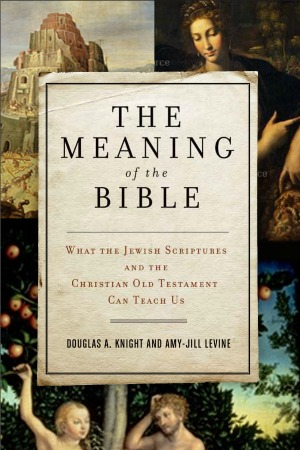 Two Vanderbilt University professors propose that the Bible can draw politically and religiously polarized groups closer together if they will take the time to view scripture through the lenses of different beliefs and interpretations.

Douglas A. Knight and Amy-Jill Levine have co-authored The Meaning of the Bible: What the Jewish Scriptures and Christian Old Testament Can Teach Us (HarperOne, November 2011) to provide readers the tools to decode ancient texts and gain new insights into beloved biblical stories.

They will read from their new book and sign copies at Barnes & Noble at Vanderbilt, the university’s new bookstore, at 5 p.m. on Nov. 11.

“[rquote]Just as Fox News and National Public Radio might cover a news event in different ways, two people can read a Bible verse and come to different conclusions,” said Levine, University Professor of New Testament and Jewish Studies at Vanderbilt.[/rquote] “For example, when the prophet Isaiah talks about a ‘suffering servant,’ does the servant refer to Jesus, does he represent the covenant community of Israel taken into exile in Babylon, or does the reference have multiple meanings?”

Levine, who is also the E. Rhodes and Leona B. Carpenter Professor of New Testament Studies, said she and Professor Knight sought to show why the church and the synagogue have often looked at the same material and interpreted it quite differently.

The comprehensive book has the highly unusual structure of being organized by themes. Subjects include: politics and economics, gender and sexuality, law and society, war and peace, and human evil and God’s response. While the professors hope that interested individuals will want to read the entire book, it is possible to head directly to a chapter on a particular topic.

The Meaning of the Bible is the product of the co-authors’ many years of teaching biblical courses on all levels and their shared interest in helping people understand the various lenses from which people interpret the scriptures.

“We certainly hope to attract a diverse audience, including Jews, Christians, Muslims and others with no religious affiliation,” said Knight, the Drucilla Moore Buffington Professor of Hebrew Bible and professor of Jewish Studies. “Some might be interested in learning about the Bible as a collection of many of the world’s greatest literary pieces or its integral role in cultural traditions.”

During the writing process, which took about a year, the professors kept abreast of major issues in the news, including church-state separation, creationism vs. evolution, abortion and gay marriage. “We took some of those hot-button issues and wrote them into the text to explain why the biblical view or views can inform people of a variety of political perspectives,” Levine said. “We also point out the dangers of saying, ‘The Bible says it and I believe it,’ as the Bible actually speaks in multiple voices with multiple interpretations.

The researchers also worked to keep the book user friendly by having footnotes to only primary sources. They use many examples from major films and other popular culture that relate to the biblical stories. For example, many people think of the late actor Charlton Heston at the mere mention of Moses. “When we think of King David, we either visualize Richard Gere or Gregory Peck,” Levine said.

While Knight focused more on historical material, Levine covered literary themes, such as the aesthetics of the Bible, how the narrative functions, religious practices, sexuality in the Bible and how the Israelites defined themselves. She also looked at the impact of their exile from their homeland and how that affects contemporary discussions of the Middle East.

Knight noted that it is no surprise that the Bible is one of the most frequently cited books by presidents and other politicians. “With an increasingly polarized electorate, our leaders cannot dodge the social issues that return every election,” Knight said. “However, we hope our book will help bring the polarized sides a little closer together and add more civility to the national conversation.”

Levine’s other recent books include The Misunderstood Jew: The Church and the Scandal of the Jewish Jesus (HarperOne) and the edited Jewish Annotated New Testament (Oxford). Law, Power, and Justice in Ancient Israel (Westminster John Knox Press) and Rediscovering the Traditions of Israel (Society of Biblical Literature) are among Knight’s publications.