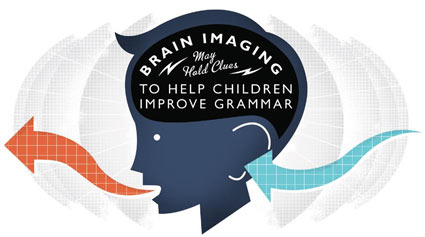 Understanding how quickly children process speech is key to understanding why some struggle with language, but accurately measuring this speed has been difficult. Vanderbilt University researchers have found that by using brain imaging they can not only accurately measure children’s language processing speed, but also predict how well the children will respond to intervention.

“We would like to understand the source of a child’s language impairment and then select a grammatical treatment that will help,” Paul Yoder, the study’s lead author and professor of special education, said. “Once we know it’s a speed issue, we can target the treatment and we can also predict how well the treatment will work.”

“To our knowledge, this is the first time that speed of speech processing has been shown to predict how effective different treatments will be in helping preschoolers with language impairments improve their grammar,” Yoder said.

Some children process what is said to them too slowly, which causes them to miss what’s in the middle of a sentence or causes them to miss word endings. For example, they may only comprehend “go” instead of “goes.” As a result, children who struggle with language often have specific trouble with grammar. However, measuring this speed has been difficult, particularly in very young children who can be easily distracted in the midst of a test.

Yoder and his colleagues set out to measure speech processing speed directly from children’s brain activity, eliminating the distraction problem.

To our knowledge, this is the first time that speed of speech processing has been shown to predict how effective different treatments will be in helping preschoolers with language impairments improve their grammar.

The method they used is called event-related potential, or ERP. ERPs are a noninvasive way of measuring the brain’s response to stimuli within milliseconds through electrodes placed on the scalp.

The researchers then used an analysis method called electrical neuroimaging analysis, or ENA, to evaluate the ERP data from across the entire scalp, not just from a single region or electrode.

They then randomly assigned the children with language impairments to one of two treatments to improve their grammar.

In the first treatment, Milieu Language Teaching, a researcher asked the child to repeat model sounds, words, phrases or sentences. In the second, Broad Target Recasting, the researcher re-stated what the child had just said in a corrected or more sophisticated form.

Both methods have been shown to be effective at helping children with a variety of disabilities improve their grammar.

After six months of either of these treatments, processing speed improved in both groups of children. Those who began treatment with particularly slow speech processing learned more grammar through Milieu Language Teaching than Broad Target Recasting.

The researchers also found that though all of the children made improvements, those who still had grammar trouble were also still processing language more slowly than their peers.

“It is not difficult to imagine a future in which an individual child’s brain responses are assessed and compared to normative data to identify the extent to which their speech processing is slow for their age, which can then be used to inform clinical decisions,” he continued.

The research is under review in the journal Developmental Neuropsychology. Yoder’s co-authors were Alexandra Key, Vanderbilt University; Dennis Molfese, University of Louisville; and Micah Murray, Vaudois University Hospital Center and University of Lausanne in Switzerland.