Results instead of revenge: A new plan for juvenile justice

The struggle against juvenile crime may come down to one simple question, says a Vanderbilt University researcher: Do we want revenge or do we want results?

If we want results, says Christopher Slobogin, the Milton Underwood Professor of Law at Vanderbilt University Law School, we should dramatically reform the system to stress community-based treatment over incarceration.

“The bottom line is, the research shows that if you’re interested in reducing recidivism, community-based treatment is far and away the best way to go,” Slobogin said. “That means fewer prisons, less incarceration and more diversion to the community.” 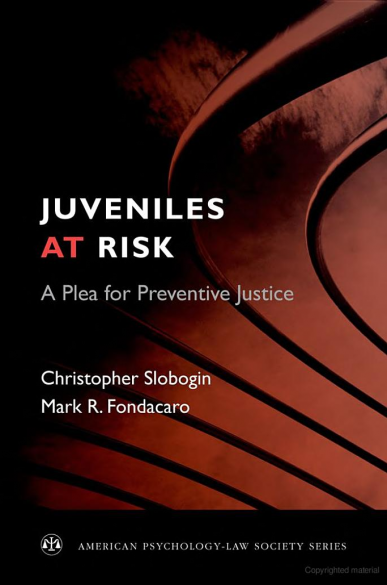 Slobogin is the co-author of the book Juveniles at Risk: A Plea for Preventive Justice, with Mark R. Fondacaro, professor of psychology at John Jay College of Criminal Justice, City University of New York.

The book, published by Oxford University Press, proposes some radical-sounding ideas, among them that juvenile offenders should never be tried as adults and never transferred to adult prisons. Incarceration in general should only be a last-resort measure for juveniles, Slobogin argues.

“We know it’s important to many people to make sure that criminals receive the punishment they deserve, regardless of whether they’re dangerous,” Slobogin said. “But polls show that people care as much about public safety as they do about vengeance.”

Community-based treatment programs are far more effective than incarceration in reducing even violent future criminal behavior, Slobogin says, because they can take better aim at the family, peer, school and neighborhood risk factors that contribute to delinquent behavior.

Slobogin also noted that neurological research shows that teenagers have undeveloped brains with less control of their impulses than adults. In some cases, society can simply “wait out” a juvenile criminal while he or she is being held in a juvenile facility until their brain matures

The worst-case scenario happens when a juvenile commits a crime, is transferred to adult court and sentenced as an adult to an adult prison. The person who is eventually released from that system is sharply more likely to commit more crimes than someone who is released back into the community and receives treatment.

“If juveniles are put in adult prison, their developmental role models will be adult criminals, which is about the worst possible way to handle the situation,” Slobogin said.

There are many political pitfalls to implementing his ideas, Slobogin admits. The idea of a violent offender being placed back in their community just two or three years after their crime would be difficult for victims to accept. And the United States now has a massive prison-industrial complex that provides jobs and is dependent on a continued flow of new prisoners for its economy.

“There is also some research showing that people who get frustrated with the legal system because of events like early releases of inmates can turn to vigilantism or be less likely themselves to follow the law because they stop respecting it,” he said.

“But other research shows that this type of reaction dissipates quickly, and the long-term results of reducing crime are probably worth that sacrifice,” he said.

“All the research shows that incarceration tends to exacerbate the risk of future crime while community-based treatment has been shown to be very successful reducing it,” Slobogin said. “Our book proposes that the law establish prevention as the goal of juvenile justice and that this goal must be achieved in the least drastic manner possible, a regime that would make community-based treatments the legally required first resort for juvenile offenders.”