Last December, Malcolm Getz was standing at the corner of 21st Avenue and Grand, facing the Mellow Mushroom restaurant. When the light changed and the crosswalk signal indicated it was safe to cross, he stepped off the curb. What happened next, said Getz, is a blur. All he remembers is feeling as though he were in a clothes dryer, tumbling end to end.

Police later told him that a motorist, thought to be distracted by a cell phone, had run the red light, striking Getz, catapulting him into the car’s windshield and launching him airborne before he landed on the concrete pavement. It all happened in an instant.

“I took the full brunt of the car as it ran the red light,” said Getz, associate professor of economics. “I dented his hood and left a spider web crack in the windshield. When it was all over, I was on the street, 40 feet from where I started. People who saw it said I looked like a stuntman.”

Getz can joke about it now, but he knows he got off lucky with only a broken left tibia. “I spent nine hours in the emergency room and it took me six months to regain strength and mobility after the accident,” he said. “At least the driver called to apologize to me. He was mortified.”

Getz’s story, unfortunately, is all too familiar. Too many pedestrians in the Vanderbilt community have had close calls or been struck by cars while going about their daily activities on and around campus.

According to statistics from the U.S. Department of Transportation, each year about 4,000 pedestrians are killed by motorists nationwide. In Tennessee, approximately 70 pedestrians are killed by motorists each year. In most cases these tragic accidents take place in and around highly populated urban areas such as Vanderbilt’s campus, at stoplights, crosswalks and everywhere in between. One of the problems, said Maj. Bob Pasinger of Vanderbilt University Police Department’s University Central Precinct, is that many pedestrians and motorists aren’t mindful of the rules of pedestrian safety.

“People are busy getting to class, work or a lunch appointment and they just want to get where they’re going,” Pasinger said. “They don’t realize that we all have to act responsibly in order to keep our community safe.”

Following Getz’s accident, a group of Vanderbilt faculty, staff and students convened to discuss their concerns.

“We’d had two Owen students in the previous 12 months who had been hit by cars,” said John Lehman, adjunct professor at Owen Graduate School of Management. “One was a second-year student who had his front teeth knocked out. We knew pedestrian safety was a problem.”

Joining the Owen School were representatives from the Vanderbilt University Law School and the economics department.

“From these communities at least five people had been hit in this vicinity over the past 24 months,” Lehman said. “And these pedestrians were not jaywalking. Motorists were blowing through stop lights and hitting pedestrians when they were following the rules and doing what they were supposed to be doing.”

Involved in the discussions were VUPD’s Pasinger and Associate Director of Community, Neighborhood and Government Relations Mary Pat Teague. Teague acted as liaison to Metro Government and moved the discussion to the next level.

“It was time to meet the challenge head-on,” Teague said.

Also adding his comments to the mix was Matthew Jacobs, then an 8th-grader at nearby University School of Nashville. Jacobs had focused his annual “change” project on addressing the pedestrian safety issues at the crosswalk on Blakemore Avenue near 23rd, a common crossing area for medical center employees. Fellow 8th-grader and Jacobs’ partner on the project George Niarhos was one of the individuals who struggled to cross this intersection on his way to school each day. Jacobs did some research and approached Vanderbilt, ultimately speaking with Teague, who promised to help.

“We knew a bunch of people who cross there. They had to wait forever, because cars wouldn’t stop,” Jacobs said. “All there was was a crosswalk and a yield sign. We thought because Vanderbilt has a hospital, they would care about safety and they would maybe put in a sign with flashing lights to make it more safe.”

Jacobs thought right. With a list of the trouble spots in hand, comments from the ad hoc safety committee and the USN students, as well as additional comments and concerns put forth by the university’s Traffic and Parking Committee, Teague contacted Metro Public Works to start the discussion.

“The Metro traffic engineers understood that due to the high volume of pedestrians and vehicles in the campus area, immediate attention was required,” she said. “In addition to our list of requested safety measures, they suggested a few additional changes. In particular, they are working on a change that will hopefully improve safety at 21st and Grand where Professor Getz was hit.”

Pedestrian safety requires both drivers and pedestrians to do their part by not only following the state law, but also using common sense and consideration, Teague said.  In addition, it requires ongoing monitoring of the intersections to see if additional changes are necessary.

A little less than a year after Getz’s accident, there are visible signs – literally – of Teague and company’s hard work. Bright yellow warning signs, many equipped with flashing lights, have been erected in several non-stoplight crosswalk locations around the perimeter of campus to put motorists on alert for pedestrians. The signs are hard to miss and remind motorists that yielding to pedestrians in the crosswalk isn’t just a courtesy, it’s Tennessee state law.

“Not everyone understands why the signs say ‘State Law,’” Pasinger said. “Motorists are required by law to yield to pedestrians who are already in the crosswalks. But that doesn’t mean it’s OK for people to walk out into oncoming traffic. Pedestrians need to look for a safe moment to cross before doing so. It’s not a stop sign.”

So far, the signs have been installed at Natchez Trace and Blakemore Avenue, at 21st Avenue and Terrace Place near the Baker Building, at Broadway between the Center Building and Ken’s Sushi, and on 21st near the law school, not far from where Getz was hit.

In addition, in several locations “lead pedestrian lights,” which give pedestrians a few extra seconds of walking time before the turn-lane traffic, are now in place.

All of these tools are great for bringing visibility to the issue of pedestrian safety. But they’re only effective if motorists and pedestrians understand and follow the rules, Pasinger said. So far, it seems the efforts are working.

“Motorists on Blakemore seem to be getting the idea,” he said. “We’ve given out far fewer citations in recent weeks as motorists have gotten into the habit of slowing down and yielding to pedestrians. We know this new initiative is working.”

Jacobs is thrilled that his project resulted in a real change.

“Most kids just do projects that focus on things at the school, but with ours, we ventured out. I learned if you work hard to change something you can do it. You just have to do the research and try to work it out, and then your goal can come true. But you just have to work hard.”

More crosswalk signs and lead lights are in the works for other intersections near campus. For more details on pedestrian safety, download VUPD’s Pedestrian Safety Guide.

Here are a few of the rules you need to know, according to the guide: 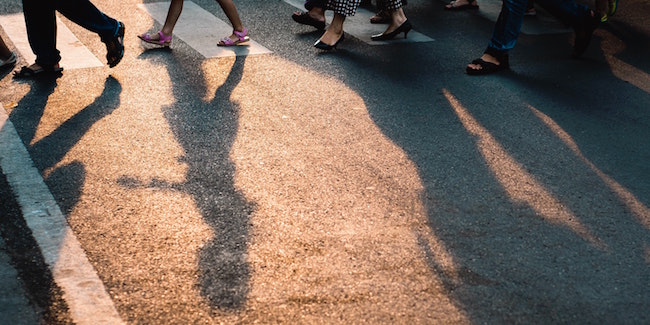