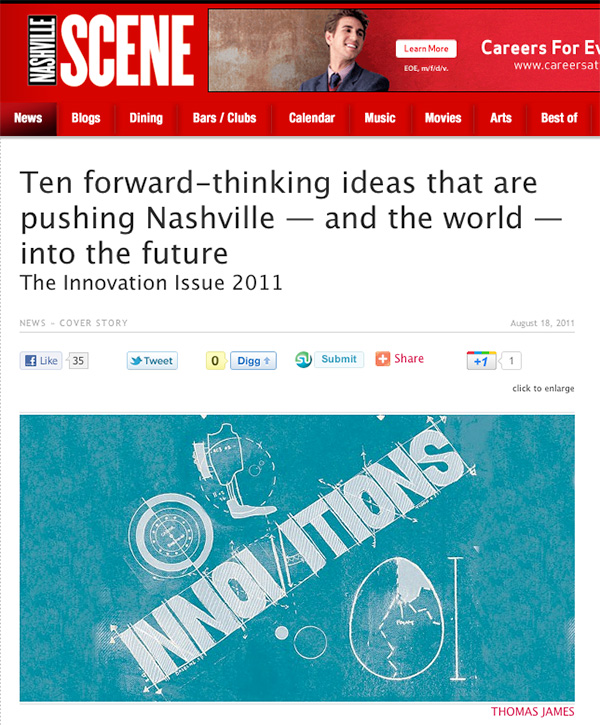 Last week when the Nashville Scene’s annual Innovations Issue hit the newsstands, three of its ten “forward-thinking ideas that are pushing Nashville – and the world – into the future” came from Vanderbilt.

The three campus projects that impressed the Scene editors were:

Digging for Drugs: Cave Chemistry. This is an effort of Associate Professor of Chemistry Brian Bachmann that combines science with elements of Journey to the Center of the Earth adventure. He has begun searching Tennessee’s extensive cave system for novel therapeutics. It is the first systematic attempt to look for biologically active compounds from cave-dwelling organisms.

Atomic Bug Spray: VUAA1 Insect Repellant. In 2005, an international team of biologists headed by Professor of Biological Sciences Laurence J. Zwiebel received an $8.5 million grant to explore new ways to combat the spread of malaria by manipulating the mosquito’s sense of smell. Last May the scientists reported a surprising discovery. Advances of understanding of the basic nature of the mosquito’s olfactory system allowed them to discover a chemical compound that appears to be thousands of times more effective than DEET, the active ingredient in most insect repellants, and appears to work equally well with mosquitoes, agricultural pests and a wide variety of other insects. Research News published a story about the discovery last May and about the original grant in 2005.

Limbs 2.0: Power Prosthetics. Within the sweeping concrete curves of Olin Hall on the Vanderbilt campus, the H. Fort Flowers Professor of Mechanical Engineering Michael Goldfarb’s research team is putting the final touches on the first lower-leg prosthetic which combines powered knee and ankle joints that allow its user to walk with a nearly natural gait. This fall he will send his design to Freedom Innovations that has licensed the device and will be producing and selling a commercial version. Research News just published a story and video about the project earlier this month. As the Scene story pointed out, this is not Goldfarb ‘s first revolutionary prosthetic. In 2007, he created a mechanical arm and hand powered by a miniature rocket motor. Although the arm was stronger and faster than commercial arms, its unusual design made it unsuitable for commercial application.  Vanderbilt published a news story about the advanced arm in 2007.