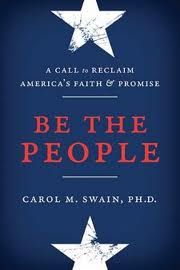 Vanderbilt University professor of law and political science Carol Swain believes that America’s departure from our founding fathers’ Judeo-Christian roots has come at a cost politically, socially and morally.

She believes that the “unbiblical” direction the country has taken, and the rejection of the notions of absolute right and wrong in favor of “cultural relativism” or the principle that an individual’s beliefs should be understood within his or her cultural context, has severely discredited America and its standing in the world.

“Acceptance of this worldview creates an environment in which tolerance is elevated as the highest virtue. In order to gain control and indoctrinate others, ‘cultural enforcers’ in media, education and government have seized responsibility to set the standards of behavior for the rest of the American people,” said Swain.

Swain explains her reasoning behind this theory and provides a conservative analysis of hot-button issues impacting the political and social landscape in her book, Be The People: A Call to Reclaim America’s Faith and Promise.

In the book, Swain cites various research, academic and political opinions, and polls, and references Scripture to bring a biblical perspective to bear on current controversial issues.

“[rquote]In order for genuine public discourse to exist in America, we must create intellectual and political spaces where people can offer religious reasoning and scriptural proofs that undergird their deepest values[/rquote],” said Swain.

Some of the controversial topics addressed include:

In her chapter on immigration, Swain references her own scholarship and the research of others in explaining her philosophy that illegal mass immigration has created an overflow of “cheap labor” which takes jobs away from legal citizens.

“The overwhelming majority of illegal aliens compete in the same job sectors as low-skilled Americans; the low pay they earn means that more families would qualify for governmental assistance, increasing costs for all taxpayers,” said Swain.

Swain references the research of constitutional scholar and Columbia law professor Philip Hamburger surrounding the separation of church and state.

“Hamburger provides support for the view that the Constitution is a document carefully crafted to prevent a national church…Hamburger believes, however, it would have been inconceivable to the framers that the First Amendment would one day be invoked to support bans against prayer in schools and public displays of the Ten Commandments,” said Swain.

Additional information on Swain can be found on her personal website.