The Kennedy Center hosted twelve children with autism for SENSE Theatre, a theatrical intervention program created by Blythe Corbett, assistant professor of psychiatry. The two-week camp was held in collaboration with the University School of Nashville Theatre Guild.

Camp participants joined with typically developing children from USN who served as models for social interaction. Additionally, the children with autism used video modeling at home to learn their lines and routines and practice social skills and emotional expression. 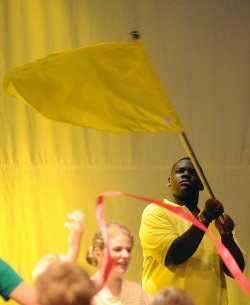 “SENSE Theatre allows us to bridge science and art in a unique intervention program for children with autism,” Corbett said.

Corbett hopes to demonstrate measurable changes in social and communication skills and monitored stress levels of the children before, during and after the camp by measuring cortisol levels.