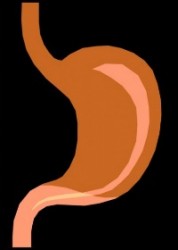 Gastroparesis – delayed emptying of the stomach that can cause indigestion, recurrent vomiting and abdominal pain – affects up to 40 percent of patients with diabetes, and is more frequent in women.

As part of the Meharry-Vanderbilt Alliance, Pandu Gangula, at Meharry Medical College, with VUMC collaborators Michael Freeman and Sekhar Konjeti, investigated the role of oxidative stress in gastroparesis. The investigators studied mice missing the gene for the protein NRF2, a transcription factor that directs the expression of multiple antioxidant genes, or GCLM, a regulator of the antioxidant glutathione.

They report in Free Radical Biology & Medicine that mice missing NRF2 or GCLM have deficient nitric oxide-mediated gastric motility, and they characterize the functional and biochemical changes in the generation of nitric oxide. The findings demonstrate that loss of antioxidant gene expression can contribute to the development of gastroparesis and suggest that antioxidant genes may be good therapeutic targets for the disorder.

The research was supported by the National Institute of Diabetes and Digestive and Kidney Diseases and the National Cancer Institute.