Change is coming, and graduates of Vanderbilt University will be its skilled, compassionate and savvy leaders, Chancellor Nicholas S. Zeppos told them May 13 at their Commencement.

About 2,843 graduates attended Commencement, which was moved to Memorial Gymnasium from Alumni Lawn because of threatening weather. Degrees were awarded to 1,734 undergraduate and 1,904 graduate students.

“Thinking people do not turn away from trouble, from evidence of change,” said Zeppos, who became Vanderbilt’s chancellor while this year’s graduates were freshmen. “They understand their own uneasiness as a trigger for inquiry and they begin to work toward managing the changes that are surely coming by first finding facts.”

The Commencement ceremony included the awarding of Founder’s Medals to the top student from each of Vanderbilt’s schools and the recognition of retiring faculty being awarded emeritus status. Martha Rivers Ingram, the outgoing chairman of the Vanderbilt Board of Trust, was also recognized.

Zeppos spoke to all graduates before they dispersed to ceremonies around campus organized by school, where they received their degrees.

Zeppos urged graduates to consider the words of philosopher John Dewey, who said that the best thing about education “is that it renders its subject capable of further education.”

“Acquisition of skill, possession of knowledge, attainment of culture are not ends: they are marks of growth and the means to its continuing,” Dewey wrote.

On a contemporary note, Zeppos advised graduates on their use of social media.

“Think before you Twitter,” he said. “Consider carefully what you say on Facebook. Blog to your heart’s content, but for certain opinions and outpourings, you may want to put those in a drawer for a while, until you are sure you want the world to know them. … It is inevitable that you will make mistakes, but you can learn from them without the entire world knowing exactly when, where and why this occurred.”

Zeppos said that an evolving and challenging world needed the “talent, skills, ideas and energy” of the Class of 2011.

“My hope and prayer is that all of you enjoy the challenges you will face when you leave Vanderbilt, that you will realize your ambitions, pay off your debts, find true love, know true happiness and in your multitude of astonishing ways you’ll individually and collectively become agents of change,” he said. 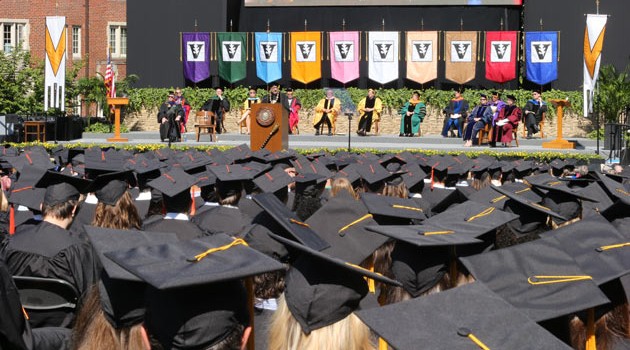 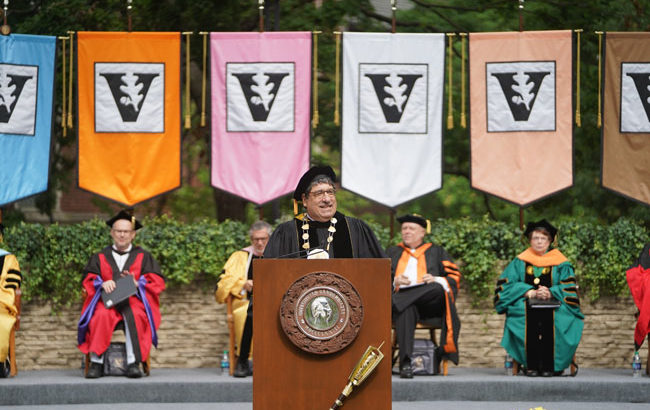