Watching the State of the Union address by President George W. Bush in 2006, Holly Tucker was struck by the president’s strong statements about interspecies stem cell research.

In the speech, Bush called for “legislation to prohibit the most egregious abuses of medical research, (including) creating human-animal hybrids.”

At the time, Tucker was researching the early history of blood transfusions. Those experiments in 17th-century France involved putting the blood of animals into humans to try and cure various maladies. The fear of pig-faced humans and centaurs roaming the countryside became part of that debate. 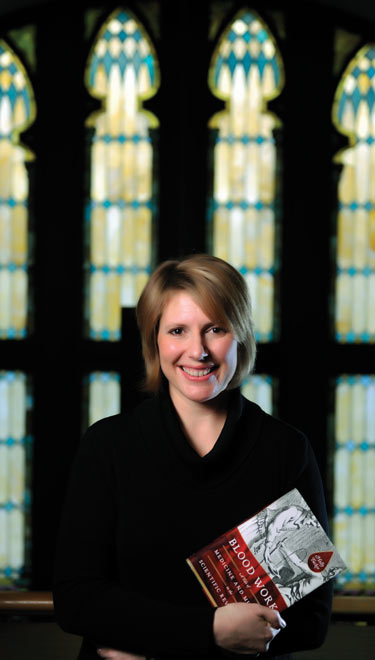 “I was struck by the ways in which history seemed to be repeating itself,” Tucker said. “I thought it was fascinating that such a common procedure in medicine today – transfusion – had faced similar questioning, concern and outrage.”

The problem is one that crops up again and again in research, Tucker said.

Such ethical dilemmas – plus a sensational trial and a conspiracy that helped delay experimentation with blood transfusions for 150 years – are the topics of Tucker’s new book, Blood Work: A Tale of Medicine and Murder in the Scientific Revolution.

“Modern medicine would be unthinkable without blood transfusions,” said Tucker, associate professor of French at Vanderbilt. “Had blood transfusions that began in 17th-century France moved forward, perhaps they would have discovered blood groups earlier and many lives could have been saved.” On the other hand, research methods were so primitive in the 1600s that many people would undoubtedly have suffered painful deaths had research continued, Tucker pointed out.

And there were worries about the unknown implications of transfusions, which were animal-to-human at the beginning. The thinking was that animal blood was more “pure” because animals did not drink alcohol, swear or overindulge. Sheep’s blood was particularly valued.

But would a man with sheep’s blood who reproduced create a human-sheep hybrid creature? Would someone given dog’s blood begin barking at the moon?

“As someone who works in history, I’m not interested in staking an argument in one or the other camp” of the modern stem cell or old blood transfusion debates, Tucker said. “Instead, I’m fascinated by how science and society talk to one another – or not – while trying to work though these thorny dilemmas.”

In Blood Work, Tucker takes readers to the streets of mid-1600s Paris as she traces the truth-is-stranger-than-fiction tale of Jean-Baptiste Denis. Tucker sets the scene for a story that reads more like a thriller than a history tome:

The French capital was cloaked in a dense and sooty haze as Parisians kept fires burning in chimneys and in the streets to stave off icy gusts of wind blowing across the Seine. Corpses – the product of unrelenting cold, hunger and violence – filled dark corners of the city’s labyrinthine streets. Masses of Parisian citizens, near-corpses themselves, were left to huddle together in a desperate attempt to survive.

Denis, one of several experimenters with transfusions at the time, was determined to make his reputation with the new process. In 1667, he treated a feverish boy with a transfusion of lamb’s blood. Buoyed by what seemed like a success and the notoriety that ensued, he found a sponsor to stage a transfusion on a street person in an attempt to cure mental illness.

Antoine Mauroy, a former valet who’d become infamous in Paris for frightening people with his antics, was forced to participate. Tucker writes:

There were loud shouts, and the room’s heavy wooden doors flew open as several watchmen dragged in an unwilling and clearly deranged Antoine Mauroy. The dirty and unshaven man continued to resist, leaving marks from his bare and calloused feet on the cold stone floor as he struggled. … [rquote]A few quick loops of rope followed by a tight tug: Mauroy, like a tamed animal, now had no choice but to submit to the gruesome experiment soon to come.[/rquote]

After a painful transfusion, Mauroy died the next day. Denis was charged and tried for murder and eventually acquitted. The court case documented, however, that the patient had in fact been murdered with arsenic by several unnamed “enemies of the experiment.”

Tucker’s research shows that the murder was really a conspiracy to discredit Denis and helped result in blood transfusions being banned in Europe for more than a century. She reveals the real killers in the book.

“Tucker’s sleuthing adds drama to an utterly compelling picture of Europe at the moment when modern science was being shaped,” Publishers Weekly said in a review of Blood Work.

Tucker’s research also has been well-received in academic circles. This spring, she will give invited talks at the New York Academy of Medicine, the Berman Bioethics Institute at Johns Hopkins, Emory, Harvard and the University of Wisconsin-Madison Medical School.

Among the barbaric experiments catalogued in Blood Work are vivisection of animals without anesthesia and injecting their veins with wine, milk and other substances in attempts to figure out the circulatory system.

“It’s hard to look at what was being done to animals before anesthesia,” Tucker said. “The 17th century was when they started to imagine that humans had souls and animals did not, so they felt free to experiment without regard for an animal’s discomfort.”

Humans also were subject to some experimentation.

“Remember, this was a time when they had just figured out 50 years earlier to use tourniquets on the battlefield,” Tucker said. “They were still pouring hot oil on wounds. It was all guess work.”

Tucker stumbled on this world when she was preparing a lecture on William Harvey’s 1628 discovery of the circulation of blood for a course on the early history of medicine she teaches for the Center for Medicine, Health and Society at Vanderbilt. While it was the use of animals as blood donors that first caught her attention, Tucker was quickly fascinated by how little had been written about the case and by the fact that those responsible for Mauroy’s death had never been exposed.

As a doctoral student, Tucker took classes in the history of medicine and science as part of her work in early French cultural studies and history. For Blood Work, she spent years researching in medical archives around the world, including London, Rome and Paris. She spent two years as associate director of the Center for Medicine, Health and Society, which encourages collaboration with colleagues at Vanderbilt Medical School as well as students making links across the disciplines. Connections made at Vanderbilt’s Robert Penn Warren Center for the Humanities also contributed to the research.

“How many French professors do history of medicine?” Tucker asked. “It’s exciting to make all these cool connections.”

One of those interesting connections concerns George W. Bush’s fear of animal-human hybrids. His mother, former first lady Barbara Bush, was later given a pig’s heart valve during surgery.

“If we want to be strict on the definition, his mother is now a hybrid,” Tucker said.