The Invisible Line: American families’ journeys from black to white

Watch: Researching ‘one of the greatest tragedies in American history'”

The idea of someone transitioning from black to white, without science or surgery, seems hard to grasp on the surface. Yet Vanderbilt Law School professor Daniel J. Sharfstein finds that African Americans have continually crossed the color line and assimilated into white communities from 17th century America through today. This actual journey has little to do with one’s skin color and more to do with a society’s willingness to look beyond race.

“We talk about the great migration north of African Americans in the 20th century, but this mass migration across the color line impacted millions of people and was hundreds of years in the making,” said Sharfstein. “It’s very easy to forget this history. This process of migrating across the color line is something that falls outside of what we think of as African American history because it’s a history that people were trying to cover up and forget as it was happening.”

Self definition, not color, was key

Sharfstein spent almost a decade researching dozens of families that, for social, economic, safety and other reasons, chose to change their race and create new lives. Sharfstein found court and government records, personal letters and other archives that helped paint vivid pictures of these Americans.

While previous records of “passing” have focused on individuals’ struggles to redefine themselves, often by leaving their homes and fabricating new identities, Sharfstein found large numbers of people who managed to defy the legal definitions of race right within their own communities. Sharfstein found that what mattered most was not the color of their skin, but how they defined themselves and related to their neighbors.

“What this research tells us is that the categories of black and white have never been about blood. There were plenty of people throughout American history who were not just white, but quintessentially white, powerfully white, and had African American ancestors,” said Sharfstein. “Then we’re left thinking, ‘What is black and what is white then if it’s not about blood and biology?’ And what we wind up with is just the fact of separation and hierarchy.” 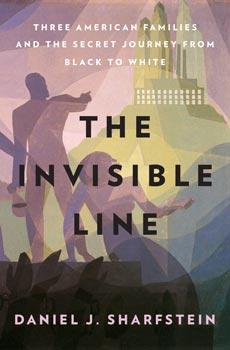 Sharfstein focused much of his research on three families whom he chronicled in a new book titled “The Invisible Line: Three American Families and the Secret Journey from Black to White.”

Each of the three representative families made their move across the color line from different social positions. The Gibsons were wealthy landowners in the South Carolina backcountry who became white in the 1760s. They ascended to the heights of the Southern elite and ultimately to the United States Senate.

“In a way, it didn’t matter that they had once been free people of color,” said Sharfstein. “What mattered was that they were planters.”

The Spencers were farmers in an Appalachian community in the hills of eastern Kentucky in the mid-1800s. The area was essentially a permanent frontier and neighbors relied heavily on each other. Though Sharfstein found information that inferred that the patriarch of the family had dark skin, neighbors were fighting so hard to survive that they didn’t focus as much on color.

“Periodically, decade after decade, there were moments when someone would get mad at one of the Spencers or someone didn’t like that the Spencers were marrying into another family, and the accusation that they were black would bubble up to the surface,” said Sharfstein. “Then almost immediately it would go back under the surface.”

The Walls were smart and powerful fixtures of the rising black middle class in post-Civil War Washington, D.C., only to give up everything they had fought for to become white at the dawn of the 20th century – clinging to the edge of the middle class.

The head of the family, Orindatus or OSB Wall, was the son of a slave and a plantation owner. He and his siblings were freed as children. He became a highly respected early civil rights pioneer; recruited hundreds of black soldiers to fight in the Civil War; was appointed the Union’s first regularly commissioned black captain during the Civil War; and had audiences with presidents in the White House.

But Wall’s children, the generation that wound up establishing themselves as white, had been raised during Reconstruction after the Civil War; had gone to integrated schools and had expected that they would have an equal share of the American Dream. Right when they became adults, the door on Reconstruction slammed shut and Washington, D.C., segregated in a very rigid and hateful way.

“OSB Wall should be treated as an American hero, but his family was not there to publicly remember or honor his legacy,” said Sharfstein.

Sharfstein’s research included meeting many of the living ancestors of families who transitioned from black to white, including members of the Gibson, Spencer and Wall families.

“There was a whole range of reactions, and certainly denial was one of them. But it also spanned the other end of the spectrum. There was one woman I talked with who descended from a family I didn’t end up writing about who said, ‘When I found out my great-great grandmother was a free woman of color in Louisiana, it changed the way I look at myself in the mirror. I now give talks at church groups about how race is an illusion.’ So it was a huge range,” said Sharfstein. “There were even people who said, ‘Knowing this information about my heritage, I’m now more racist than I ever was.'”

Read more about the families in The Invisible Line and what inspired Sharfstein to take on this type of race research.