“The Sixties at 50,” an exhibition of unique video, photographs and other treasures from one of society’s most significant decades, is now open at the Vanderbilt University Central Library and Special Collections.

“With the beautiful new spaces and the libraries’ expanded exhibition program, we will become a destination for the community and visitors to Nashville,” Connie Vinita Dowell, dean of libraries, said. “The exhibit takes us back half a century to an electrifying time that included the struggle for civil rights, the space race, political assassinations, Vietnam War and much more.”

The new galleries, located on the library’s second and fourth floors, showcase Vanderbilt’s Special Collections with items that include rare footage of President John F. Kennedy, the Rev. Martin Luther King Jr., astronaut John Glenn and other speakers who came to Vanderbilt in the 1960s; on-stage photographs, storyboards and notes from the popular films of Oscar-winning director Delbert Mann; and a conscientious objector’s history from the Vietnam War era.

In addition, there are eye-catching prototype cars from the Lane Motor Museum and astronaut gear and space models loaned by NASA and the Johnson Space Center. From the pop culture of 1960s pulp fiction and television commercials for Geritol to the moving images of President Kennedy’s funeral and man’s first walk on the moon, these documents reflect a decade of change in this country.

“Drawing on libraries’ unique and rare treasures, along with generous loans from friends of Vanderbilt Libraries, the exhibits speak to the courage, innovation, dreams and sometimes disillusionment that Americans experienced during the turbulent 1960s,” Dowell said.

One goal of the nearly completed $6 million library renovation, designed by Nashville architects Gilbert McLaughlin Casella, has been to create a more attractive and visually interesting entrance to campus from 21st Avenue South. This is partially being accomplished through the glass enclosure of the library breezeway that fronts 21st Avenue. This provides a large new gallery for professionally designed exhibits.

Dowell noted that the idea to create more gallery spaces came from Vanderbilt students, who said they wanted artwork and exhibits to enrich their experiences at the library.

“Providing a major entryway to campus through the galleries, exhibits and the library was very appealing,” she said.

The nine interactive touch screens that accompany the exhibits contain digitized images of rare objects from the library’s Special Collections and the Vanderbilt Television News Archive, the world’s most extensive and complete archive of television news. The library collaborated with Nashville’s Anode, Inc., a creative agency whose clients include the Smithsonian Institution, Colonial Williamsburg and Walt Disney World, to create these groundbreaking resources.

“Vanderbilt in the 1960s” is one of the inaugural exhibits in the second floor gallery. Visitors can enjoy an interactive touch 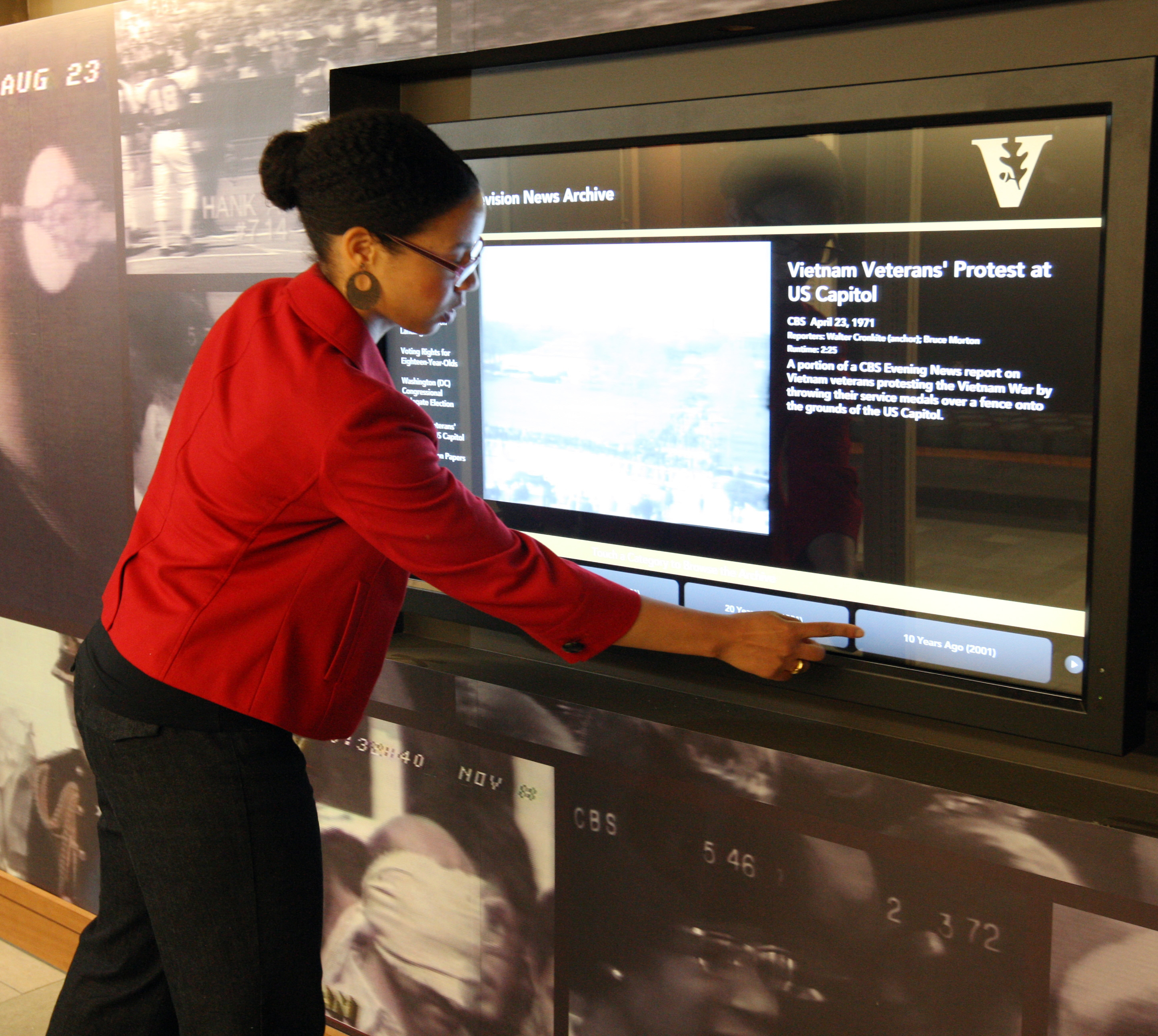 screen with video clips of prominent speakers on campus, including President Kennedy during his 1963 address at Vanderbilt Stadium. In addition, there are student-generated video clips of major and sometimes controversial figures who participated in the annual IMPACT Symposium. Stokely Carmichael, Robert F. Kennedy, Tom Hayden, Eugene McCarthy, John Glenn and William F. Buckley are among those featured.

Other exhibits for “The Sixties at 50” are located just off the building’s fourth floor main lobby, which faces campus. Two time capsules from the 1960s show how Vanderbilt students envisioned the time period. Themes for the lobby exhibits include the space race between the United States and the Soviets, ‘60s music and culture, and Vietnam War protests. An interactive touch screen features video from the Vanderbilt Television News Archive, which began recording network newscasts in 1968.

“The Sixties at 50” was curated by a team of Vanderbilt subject librarians and technology staff under the guidance of Celia Walker, director of special projects. She is a former senior curator of American art at Cheekwood and has worked on projects for the National Museum of Women in the Arts and Fisk University.

The exhibition, which runs through May 15, 2011, is free and open to the public weekdays 7:30 a.m. to 7 p.m., Saturdays 9 a.m. to 5 p.m., and Sundays 11 a.m. to 5 p.m. It’s located within the Central Library and Special Collections at 419 21st Ave. S. Visitor parking is available in the Wesley Place Garage just across the street.  For more information, visit www.library.vanderbilt.edu.