Five Vanderbilt University alumni who have distinguished themselves through a variety of careers – including public servant, journalist and humorist – and have made significant contributions as staff members of the university’s student media, will be inducted into the Vanderbilt Student Media Hall of Fame on Oct. 16, 2009.

“The selection committee feels strongly that the overall accomplishments and activities of these five alumni merits recognition in the newly established Student Media Hall of Fame,” said Chris Carroll, director of student media, Vanderbilt Student Communications. “This is the highest honor that we can bestow on these former student journalists.”

To be considered, alumni had to have worked as a student staff member at least 10 years prior to the Hall of Fame induction date.

Sen. Alexander, who earned his bachelor’s degree in 1962, majored in Latin American Studies. He was a reporter and news editor of The Vanderbilt Hustler student newspaper. The Maryville, Tenn., native is a former two-term governor of Tennessee, U.S. secretary of education, University of Tennessee president and professor at Harvard’s School of Government. He earned his J.D. at New York University Law School. In private life, he helped found the nation’s largest provider of worksite day care, Bright Horizons Family Solutions Inc.

Bayless, who grew up in Oklahoma City, Okla., attended Vanderbilt on the prestigious Grantland Rice Scholarship. The 1974 graduate covered sports for The Hustler and majored in English and history. Bayless developed a national reputation as a sports writer for the Miami Herald and Los Angeles Times. He wrote three books chronicling different eras of the Dallas Cowboys and was a prominent sports columnist in Dallas, Chicago and San Jose before being hired full time as a commentator by ESPN for programs like 1st and 10 and SportsCenter.

Blount, also a Grantland Rice Scholarship recipient, came to Vanderbilt from Decatur, Ga., where he was editor of his high school newspaper. He majored in English and began working for The Hustler after becoming friends with Lamar Alexander and other student journalists. Blount became editor before graduating in 1963. He is a prolific writer and humorist who has authored 21 books. He’s a columnist for The Oxford American, contributing editor for The Atlantic Monthly, and panelist for NPR’s Wait, Wait … Don’t Tell Me.

Elson, a native of Oak Ridge, Tenn., majored in English at Vanderbilt. She was elected the first post-World War II woman editor of The Hustler. She worked at the Nashville Banner the spring of her senior year in 1974 before graduating magna cum laude/Phi Beta Kappa. She reported for the two Dallas newspapers before moving to the Chicago Tribune, where she held a variety of positions, including associate managing editor/features. At the Tribune, she edited a series about the Human Genome Project that won a Pulitzer Prize for exploratory journalism. Elson became managing editor of Tribune Media Services, the syndication and licensing division of Tribune Co., in 2004.

Feist, who majored in political science at Vanderbilt, began volunteering for The Hustler his first day on campus.

He had strong ties to the university and student media as his father, Lee Feist, was a 1965 graduate and Hustler staff member. The younger Feist, who was born in Trinidad, hosted Viewpoint, a campus public affairs/talk program that aired on Nashville cable. He graduated magna cum laude and joined CNN full-time in 1991. He was founding executive producer of The Situation Room with Wolf Blitzer. Feist was named political director and senior executive producer of political coverage during the 2008 presidential election. In January 2009 he became CNN’s vice president of Washington-based programming. Feist earned his law degree from Georgetown University Law Center. 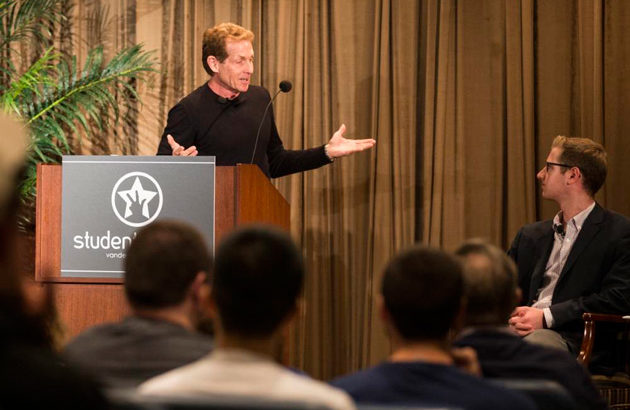