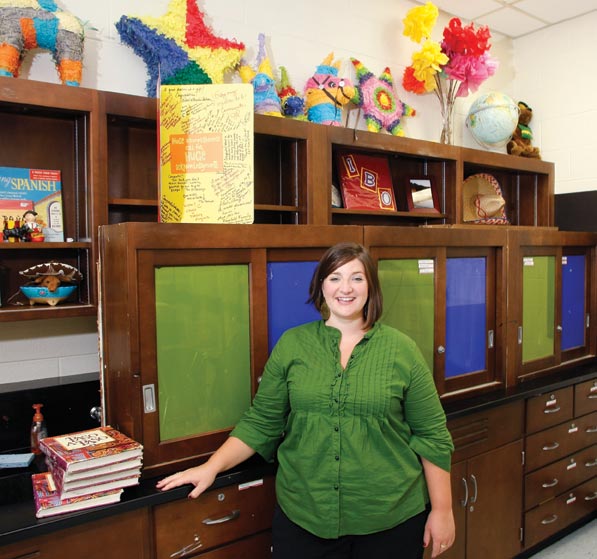 One of the things Peabody graduate Amy Cate, BS’03, likes best about teaching is the unpredictability. “It’s different every day,” she says. “You go in with a plan, but you never know what’s going to happen.” As a Spanish teacher at J.T. Moore Middle School, a public school in Nashville, Cate often tells her students, “Así es la vida”—“such is life”—presumably in order to help them deal with perennial travails such as homework or quizzes. But the phrase can also be applied to the serendipitous route that led Cate to the classroom, where she was recently named the 2008 Metropolitan Nashville Public Schools Middle School Teacher of the Year.

Initially a pre-med student at Vanderbilt who soon discovered that “I didn’t like chemistry,” Cate signed up for an education course on the recommendation of her academic advisor. The required practicum at Hillsboro High School was all it took to realize that she wanted to be a teacher. Though she intended to work at the secondary level after graduation, the job fell through, and Cate applied at the last minute for a position at J.T. Moore. Five years later, her enthusiasm for teaching middle school Spanish remains apparent.

“I love having kids [at this level of study] because it’s their first experience with the subject,” she says. “There are no preconceptions—it’s a clean slate—so you can shape their whole opinion about a language.” Cate’s zeal for her work also helps create a positive environment that’s good for both teacher and students. “Kids have to enjoy what they’re doing,” she says. “Happy kids usually tend to learn better.”

The importance of mentoring

Cate cites the continued presence of mentors—a hallmark of Peabody’s teacher training program—as essential to her success as a teacher. “Peabody connected me with people to whom I still look for help today,” she says. In contrast, “Some people I’ve talked to from other [teacher training] programs felt like they had to sink or swim.” She believes the lack of mentoring can deter education students from entering the field.

Amy Cate was not the only Peabody alumna who won Metropolitan Nashville Teacher of the Year honors this year. Melissa Brock, BS’93, MEd’96, a reading specialist at Kirkpatrick Elementary School, won the Elementary Teacher of the Year honor. Her work on a Reading First grant has allowed her to focus on becoming a literacy leader at Kirkpatrick, which has a number of students from high poverty neighborhoods.

“These kids have lots of knowledge, but it’s not necessarily school knowledge,” Brock stated in an interview with the Tennessean. “It’s important for us to bridge that gap between what you need to learn in school and what they already know from the community.”

Cate’s own student teaching, on the other hand, was “a time for real growth,” the culmination of years of practica experiences in the classroom. “I’d been in an ELL class, a pre-K special ed class, an inner city school, a magnet school—I’d had experience in basically every kind of school Nashville offers. Peabody did the best anybody can do, because they put you out there—they don’t just talk about it.”

The solid foundation she gained from her training at Peabody allows Cate to continue pursuing goals for both her own practice and for her students. “My view of teaching is that if I can teach a student how to approach a problem, that’s better than teaching just the nuts and bolts,” she says. “Peabody gave me the facts, but also gave me the know-how to approach a problem in the right way.”

Cate is also eager to recreate her positive experiences as a student teacher for current teacher candidates, frequently welcoming groups of students at different levels of education into her classroom. “I love the quote, ‘To whom much is given, much is expected,’” she says. “I received gracious help freely given, and so I feel as though it is my responsibility—and my opportunity—to give the same kind of help to other potential teachers.”