Vanderbilt theatre season kicks off Sept. 30 with The Man Who Came to Dinner

NASHVILLE
,
Tenn.
– A comedy about a celebrated radio personality recuperating from a fall in 1939 small-town

The Man Who Came to Dinner, by Moss Hart and George S. Kaufman, premiers at 8 p.m. at Neely Auditorium on the Vanderbilt campus on Friday, Sept. 30, and will be performed on Oct. 1, 6, 7, and 8 at the same time. A matinee performance on Oct. 2 will begin at 2 p.m.

The comedy of language and character kicks off a season where the Department of Theatre will show its range with comedy, drama, Shakespearean tragedy, and even attempt to tread some new theatrical ground.

Admission to all performances is $8 for the general public, $5 for graduate and professional students, and free for undergraduates with Vanderbilt ID. Tickets may be reserved by calling 615-322-2404.

Senior theatre major Adrienne Day will direct Getting Out, a play by Pulitzer Prize-winner Marsha Norman, in November. Rebirth and renewal are major themes of the piece. Recently released from prison, the play’s protagonist, Arlene, struggles to forge a new life of integrity as a parolee.

In February, Terryl Hallquist, associate professor of theatre and co-director with husband Jon Hallquist of Vanderbilt University Theatre, will direct William Shakespeare’s Hamlet. According to the director, it will be only the second staging of Hamlet at the university since Neely Auditorium was renovated to house the theatre program in 1975.

Assistant Professor of Theatre Jeffrey Ullom will spend the spring semester working with a group of students to bring Dramablog: An Exploration of the Political and Personal to the Vanderbilt stage in April.

“Based upon the 1930s and 1940s idea of the living newspapers, students will be writing brief solo pieces on a daily basis in order to maintain the topicality of the show,” Ullom said. “As a result, I’ll be teaching the students playwriting throughout the semester, encouraging them to be bold, political and honest while writing and performing.

“The term ‘dramablog’ derives from an interest in personal opinion, personal expression and immediacy,” he said. “I’m planning on the audience selecting which pieces are presented during our hour-long performance, and because I’m asking the students to continually write, new pieces will be added for every performance. … Basically, I’m interested in providing a different theatrical experience for both our students and our audiences – breaking away from the age-old processes for rehearsal and production and trying to explore the potential of this form of theatre.” 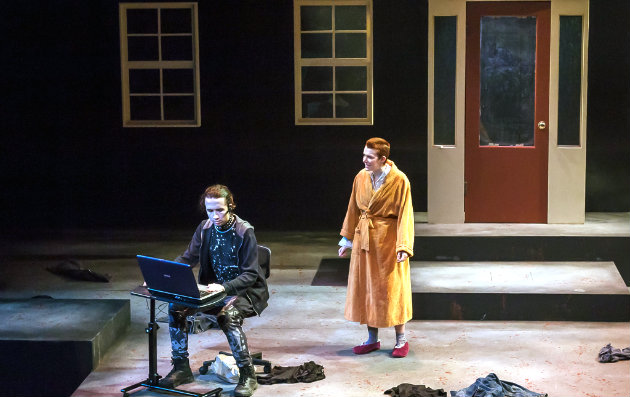