Former Vanderbilt President Emmett Fields dies, Was dean of College of Arts and Science from 1960-69

NASHVILLE, Tenn. — Emmett B. Fields, the only person ever to have the title of president of Vanderbilt University, died at home today at 81.

Fields served the university as president during the last years of Chancellor Alexander Heard’s administration, from 1977 to 1982, but he believed that his greatest contributions to Vanderbilt were made during the 1960s, when he was dean of the College of Arts and Science. He enjoyed being remembered as “Dean Fields,” according to his wife of 58 years, Christine. “As dean of the Arts and Science faculty, he especially enjoyed the professional interaction with his colleagues on the faculty for whom he felt great esteem and affection,” she remembered.

Chancellor Gordon Gee praised Fields for his dedication and years of service to the university. “Emmett Fields devoted a large part of his life to Vanderbilt, serving with distinction in two very important leadership positions. His efforts helped make Vanderbilt a stronger, more distinguished university and set the stage for our great success over the past two decades.”

Jacque Voegeli, dean of the College of Arts and Science, emeritus, added, “While dean of the College of Arts and Science during the 1960s, Emmett Fields vigorously led and oversaw a major expansion of the student body, faculty and programs of the college. In his term as president, he strove to advance Vanderbilt’s quality and reputation through alignment of the university’s resources behind its highest academic priorities and maintenance of high qualitative standards for faculty appointment and promotion. In these endeavors, he was an extraordinarily able and creative leader who, because of his judgment, forthright approach and resolution, exerted strong and positive influence on important decisions and policies.”

A native of Fort Smith, Ark., Fields earned his undergraduate degree from Ouachita College in Arkadelphia, Ark., in 1948, and both his master’s degree and doctorate in history from Vanderbilt, in 1950 and 1953 respectively. He was an American history scholar, his doctoral dissertation having been on the agricultural history of Virginia.

He began his professional career as an assistant and later a fellow in history at Vanderbilt, then went on to teach U.S. history at what was then Jacksonville State College in Jacksonville, Ala.

In 1957, he returned to Vanderbilt to become director of summer sessions and associate dean of the College of Arts and Science; he also taught courses in U.S. and Southern history and historiography and historical method. Fields was named dean of the college in 1960, a position he held until 1969.

Fields accepted an even greater challenge in 1975, when he was named president of the State University of New York at Albany, the flagship institution of the massive SUNY system.

In 1977, Fields returned to Vanderbilt to serve in a new position, that of president. Chancellor Heard and the Board of Trust had created the position, some said with Fields in mind, to support the role of the chancellor during the university’s $150 million capital campaign.

According to Gone with the Ivy, a history of Vanderbilt, President Fields, who reported to the Board of Trust, served as “the chief academic and administrative officer of the university.” Fields was foremost a manager, taking charge of many of the day-to-day campus operations and leaving Chancellor Heard to concentrate on fund-raising and external relations.

Of Fields, Distinguished Professor of History, Emeritus, and Gone with the Ivy author Paul K. Conkin said, “He had long and varied administrative experience, was informed on issues affecting higher education and was conversant with management theory. …He reflected an intense, even sentimental affection for Vanderbilt.”

Conkin noted that Fields “assumed the presidency at the beginning of the centennial campaign, at a time of looming deficits, lagging faculty salaries and a cacophony of dire predictions about the future of higher education.” Not long after being named president, he established a theme: “the need for a few carefully focused missions and the elimination of all peripheral or unsuccessful programs in a ‘steady state’ era of limited resources.”

In 1978, Fields launched and directed the “reassessment” effort, a comprehensive study of the university’s academic and administrative programs that would clearly order its priorities.

This discipline left a lasting impression on the university. “Emmett’s leadership in the reassessment process, and his careful stewardship of the expense budget, provided the financial base that made possible many of the new initiatives that followed his term in office,” said Jeff Carr, vice chancellor for university relations and general counsel, emeritus.

At the end of the capital campaign and upon the retirement in 1982 of Chancellor Heard, the Board of Trust discontinued the two-tiered administrative structure.

While he was intensely loyal to Vanderbilt, upon leaving the university, Fields soon shifted his focus to another of his passions, sailing. He and his “first mate,” wife Christine, lived aboard a 38-foot sailboat, the Ishmael, for almost two years, cruising all over the world, from Maine to the Yucatan, Nova Scotia to the Florida Keys and the Bahamas. They sailed until the final days of his life on the Hornblower, another 38-foot sailboat.

A memorial service is scheduled for 11 a.m. on Saturday, Sept. 24, at Westminster Presbyterian Church at 3900 West End Ave. Visitation with the family will be at the church following the service.

In addition to his wife, he is survived by three children, Ross C. Fields of Austin, Texas; Alison Fields of Alexandria, Va.; and Leslie Fields of Falmouth, Mass.; three grandsons, Rylan Fields, Zachary Weishar and Ian Weishar, and one granddaughter, Megan Vail. 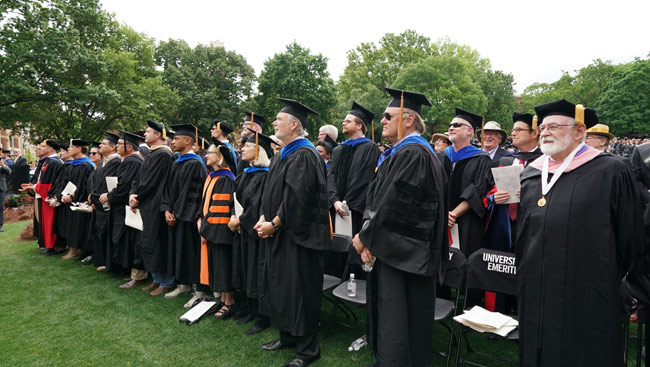